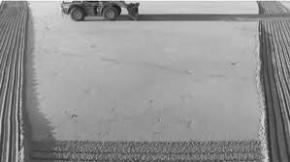 The film programme Constructed Sceneries explores the different ways in which artists use cinematic apparatus to re-contextualize and challenge standard perspectives of public surroundings. This curated selection combines film projects from SKOR’s archive, setting them alongside other video works which actively blur the borders between “natural” landscapes, urban contexts, staged environments and imaginary terrains. Each piece makes use of the inherent fictional aspects of filmmaking as well as cinematic tools – such as a voice-over, editing, frame composition – to divulge the makings of “place” and the mechanisms that allow such constructions. The programme surrounds two broad areas of SKOR’s activities over the last years – the cityscape and the countryside – while simultaneously underlining the importance of the point of view of the spectator/resident/visitor in framing these seemingly different arenas.

High&Low Bureau is a curatorial duo composed of Yael Messer and Gilad Reich. They curate exhibitions, film programmes, performative events and publications. High&Low work in collaboration with artists, art institutions, festivals and fellow curators, engaging with a plethora of disciplines, media and modes of artistic expression. Their projects are derived from the different social and political spheres in which art is produced and operates. The duo is interested in the latent power relations that construct specific forms of existence and in the role of art in articulating, symbolizing and imagining alternative ways of being in the world. More info: http://www.hlbureau.org/