Free admission, even without a pass!

Marijn van Kreij has invited the Fifi Hengsten, a Rotterdam artists' collective that also performs as a band, for Museum Night 2008. The visual and musical spectacle of the Fifi Hengsten will be a part of ?Tomorrow is Humourless?, Van Kreij's current exhibition at SMBA. In addition, Van Kreij has put together a programme with videos and performances by Yasser Ballemans, David Blandy, Aleksandra Domanovic, Meiro Koizumi, Torsten Lauschmann, Seth Price, Pipiloti Rist, Bas Schevers and Jennifer West.

The experimental Dutch-language music by the Fifi Hengsten (Wies Arts, Rop van de Laar and Leon van den Langenberg) is larded with enthusiastic base lines, groovy drums and incredible organ melodies. Various short performances by the Fifi Hengsten will take place in a special setting created just for this occasion. The videos will be screened the whole evening on different monitors and as projections spread through the exhibition space. 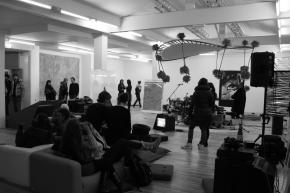 The video works I Am (2003-2004) by David Blandy and Mum (2003) by Meiro Koizumi refer to father and mother figures, respectively. Although in a superficial viewing both videos may seem to have a comic effect, the undertone is serious, or even bitter. The item by Yasser Ballemans being screened is a video record of the performance De Mega-jackpot (2002), in which the artist, at a branch of the Holland Casino, shouts the text from the electronic text display on the façade through a megaphone ad nauseam. Van Kreij also selected a classic video work by the Swiss artist Pippilotti Rist, entitled I’m Not The Girl Who Misses Much (1986). This constantly repeated sentence comes from the Beatles song ‘Happiness Is A Warm Gun’. Manipulation of the speed and video effects change Rist's voice into a parody of female hysteria and her body into a grotesque dancing doll.

In Folk Music and Documentary (2003) the American artist Seth Price raises questions about the use of language and images. His point of departure is the political world in which terms such as ‘globalisation’ and ‘politics’ have become empty shells through constant daily use. He examines the clichéd ideas that people have dished up to them by the press and media.

Pandora’s Ball (2008), a mysterious video projection by Torsten Lauschmann, is of a whole different order. This intriguing video ‘collage’ refers to the myth of Pandora.

In Anhedonia Aleksandra Domanovic combines video images that come from what is called an image bank (Image Database) with the sound track of Woody Allen's 1977 film Annie Hall. Key words from the witty dialogues were used as search terms in the database. In psychology anhedonia means the incapacity to enjoy generally ‘pleasant’ experiences such as, for example, eating, physical activity or social or sexual interaction. Initially Woody Allen's film was to be called Anhedonia, but this was later changed because it was regarded as ‘unmarketable’.

Jennifer West subjects her films, constructed from autobiographical footage shot on 16mm stock or of found footage, to various physical manipulations: the celluloid is set on fire, scratched, boiled, treated with all sorts of make-up products, and skateboarded over, danced on, or eaten. During Museum Night she is showing the work Nirvana Alchemy Film (16mm black & white film soaked in lithium mineral hot springs, pennyroyal tea, doused in mud, sopped in bleach, cherry antacid and laxatives - jumping by Finn West & Jwest) (2007).

Finally, Bas Schevers does his performance Stuntman. This performance was previously seen in Breda and at Art Brussels. His work reflects in a humorous way on the relation between art and the viewer.

Van Kreij’s exhibition ‘Tomorrow is Humourless’ contains drawings, murals, photographs, objects and videos that often refer to pop and mass culture. Using written and drawn symbols, he creates a world where light-heartedness rules and where rules are undermined. His work will interact with the ad hoc installation by the Fifi Hengsten and the videos and performances of the other artists. Various things they share can be recognised, such as the relation with music, popular culture and media, working with repetition, provocation and the investigation of the process of expectation.