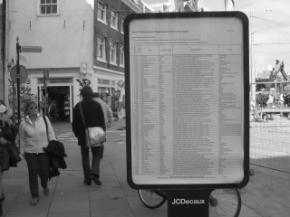 The List is a project about the borders of ‘Fortress Europe’, and poses the question of to what extent art can play a role in addressing this current social, political and cultural topic.

The title ‘The List’ refers to the list of names of all refugees who, as far as can be determined, have died during their efforts to reach Europe.

Since 1993 this death register has been maintained by the non-profit organisation UNITED, and to date comprises more than 7,000 names. From March 14 through 21 the list will be presented as a poster in 100 MUPIs – lighted street advertising signs – all around the city of Amsterdam.


Thursday, March 15 there will be a seminar held at SMCS on 11 in which an international company of filmmakers, artists and academics will present work in the context of the list.

They will address questions such as how art can retain both its autonomy and its critical potential in relation to the reality of Fortress Europe, how the reality of the list of the dead relates to art, and how art can help focus attention on migration, the register of the dead, and Fortress Europe. Further, both Boonstra and Zilnik will screen films that connect with the topic.

During the project an information centre will be set up in the SKOR INkijk on the Ruysdaelkade in Amsterdam, to provide more information about The List and the participating organisations to interested parties and passers-by.

The List is a project by artist Banu Cennetoglu and curator Huib Haye van der Werf, produced by Stedelijk Museum Bureau Amsterdam, in collaboration with the Art in Public Space Foundation (SKOR), SMCS on 11, UNITED for Intercultural Action, Maison Descartes - Institut Francais des Pays-Bas and Idea Books. The List is made possible in part by the American Center Foundation.

Programme for the Seminar & film screenings

Marjoleine Boonstra, filmmaker and photographer. In 2002 she received the L.J. Jordaan prize from the Amsterdam’s Fund for the Art and the Icodo prize for her film Bela Bela. Boonstra’s films are to be seen internationally through various institutions such as Arte, BRT, VPRO and HBC. (www.marboni.nl).

Ad van Denderen, photographer. Over the past twelve years Ad van Denderen has done many photographic reports on refugees, often during their dangerous migration, in order to put the viewer right at the scene of the action and penetrate to the heart of this sensitive subject. He has won various prizes for his work, and published in periodicals such as Vrij Nederland, Geo and The Independent.

Marina Grzinic is a researcher at the Institute of Philosophy at the Slovenian Academy of Science and Art in Ljubjana, Slovenia, and professor at the Academy of Visual Arts, Vienna. She is also active as a media theoretician, art critic and curator.

Martin Krenn, artist. In his work he investigates and treats social/political issues. He uses various media, including photography, video and internet to develop projects that take place in both exhibitions and in public space (both virtual and physical). (www.martinkrenn.net).

Willem van Weelden is a researcher, writer, visual artist and lecturer in the field of interactive media. He has been involved with many projects surrounding the topic of the social and political implications of media and information.

Zelimir Zilnik has been making and producing films in the former Yugoslavia since the 1960s. He was the founder of the production company Teresianum, and made television productions for the independent radio and television station B92 in Belgrade.