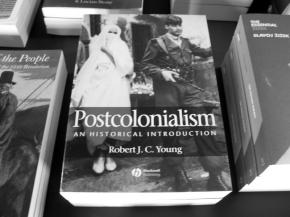 Within the context of The Marx Lounge, Stedelijk Museum Bureau Amsterdam is also organising activities around the subject of post-colonialism. Post-colonialism is here placed in the wider context of the ubiquitous market thinking that drives the process of globalisation today, including the abuses that flow from it, and thus unavoidably becomes a topic within the themes of The Marx Lounge.

Reservations can be made by sending an e-mail to marxlounge@smba.nl. Include your name, contact data, and the date and title of the activity/activities for which you are reserving a place.

This reading group, led by Joris Lindhout, provides an introduction to ‘hardcore’ post-colonial theory. Lindhout, the artist Renzo Martens and the participants in the group will discuss the present situation in the Congo, on the basis of the literature they have read. Renzo Martens (b. Sluiskil, 1973) studied at the Catholic University of Nijmegen and the Vrije Universiteit, Brussels. In addition he attended the Royal Academy for the Fine Arts, Ghent, and the Gerrit Rietveld Academy in Amsterdam. For his film Episode III – Enjoy Poverty (2008) Martens travelled through the Democratic Republic of the Congo with his video camera; one of the insights he came to there was that the inequality between the rich West and poor Africa is maintained by iron laws.

Sunday evening 22 May, 8:30 p.m. Screening of Pasolini’s Appunti per un Orestiade Africana, with an introduction by Patrizio Di Massimo, moderated by Cosmin Costinas. Programme in English.

For The Marx Lounge the artist Patrizio Di Massimo (b. 1983, Jesi, Italy) discusses the film Appunti per un Orestiade Africana (Notes for an African Orestes) (1970) by the Italian filmmaker Pier Paolo Pasolini (1922-1975). In this film Pasolini shows the process which preceded the making of a film – never realised – about the Greek myth of Orestes in Africa. In this film he reflects on the political situation of post-colonial Africa and enters into dialogue about this with African intellectuals. Appunti per un Orestiade Africana affords a look at Pasolini’s political thought. This film has been a major influence on Di Massimo’s work, particularly on Oae (2009), shot in Tripolitania.

Di Massimo is a resident at De Ateliers in Amsterdam, and has shown at venues including the Kadist Art Foundation in Paris (2009), Witte de With in Rotterdam (2009) and Art Basel Statements (2010). Patrizio Di Massimo’s works The Negus said: give me the lion keep the stele! (2010) and Duet for Cannibals (2009), in which he referred to the post-colonial situation in his native Italy, were previously seen at SMBA during the exhibition See Reason.

BAK curator Cosmin Costinas will moderate and wrap up this whole evening with a discussion of the present situation in the former Italian colony of Libya, in combination with Di Massimo's work.

This reading group, led by Joris Lindhout an Quinsy Gario, provides an introduction to ‘hardcore’ post-colonial theory. On the basis of a specially prepared reader Quinsy Gario does deeper into post-colonial theory. Among the topics to be dealt with are texts by Rosi Braidotti, Robert Fraser, Walter Mignolo and Homi Bhabha. Gario (b. 1984, Curaçao/St. Maarten) is a scholar in the fields of theatre, film and television, and has made programmes in each of these media, a performance poet and former member of Poetry Circle International, a trend analyst with Science of The Time, a visual artist and columnist for NiNsee. Presently he is working on a Masters degree in Comparative Women’s Studies in Culture and Politics at the University of Utrecht.

Thursday, 26 May, starting 8:30 p.m. Screening of Alfredo Jaar’s film Múxima with an introduction by Cláudia Cristóvão. Programme in English.

Alfredo Jaar is enriching his multi-faceted oeuvre with a number of films, of which Múxima (2005) was the first. Múxima (which means ‘heart’ in Kimundu) is an Angolan folk song, six different interpretations of which Jaar incorporates into his film. On the basis of images and music, in this film Jaar reveals the imbalances and contradictions in Angola, a country where more than 80% of the population live in poverty while at the same time European, American and Asian investors profit from the oil present under its soil.

Múxima will be shown during the evening, with an introduction by the artist Cláudia Cristóvão. Afterwards she will talk about her own work with regard to post-colonialism.

Cristóvão (b. 1973, Luanda, Angola), now Portuguese, studied at the Gerrit Rietveld Academy and Saint Martins College in London, and works primarily with film and photography. In 2009 she showed her work during Continental Rifts: Contemporary Time-Based Works of Africa, in the Fowler Museum in Los Angeles, where Múxima was also shown.

This reading group, led by Joris Lindhout, provides an introduction to ‘hardcore’ post-colonial theory. In this session, the documentary Waar de ratten koning zijn (1985), about Amsterdam squatters in the 1980s, will be shown in the presence of director Barbara den Uyl.