The solo exhibition Antonis Pittas – hold on plays on the various meanings of the phrase “hold on:” a request to wait a brief moment, words of encouragement for enduring a difficult situation, and the physical act of maintaining one’s grip with both hands. Pittas’s installation combines these meanings to create free associations between the situation in the exhibition space, various art historical sources, and imagery relating to the distress of contemporary European politics. In this way, Pittas provides a platform on which to reactivate all of these elements as parts of public memory in the making, in what could be called a performative installation.
Tamara Kuselman will present a performance that responds to Pittas’s work on the last day of the exhibition. 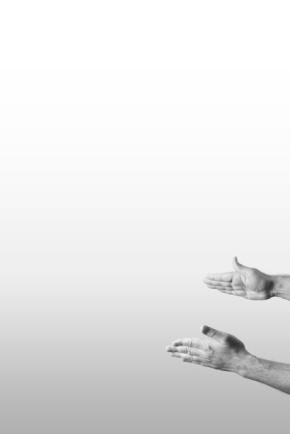 Next to marble clipboards with collections of printed images and bronze shelves floating freely on the walls, Pittas will install four large pleather objects. These sculptural objects take the artist’s hands as a model, enlarged with a factor of twelve and presented in the colors red, blue, yellow, and white. Uniting sculpture and furniture, these objects are invitations to take a seat, but they also highlight the great symbolic value of hands. Pittas’s objects combine an eminent monumentality and a subtle ephemerality. These everyday objects are made with materials typically used to create monuments in the public space, which gives them a special air of grandeur. Visitors are integral to the completion of the work, as they activate the space. By lying on one of the sculptural hands, by picking up a marble clipboard, and by browsing through the collections of images of hands, visitors can use the space at their discretion.

Pittas’s installation is inspired by modernist spatial designs from the early twentieth-century avant-garde and builds upon his research about recent political slogans and writing. Rather than creating visionary projects like the modernist Russian avant-garde or aligning himself with a certain political movement or party, Pittas analyzes the aesthetics of their visual materials and tries to explores what it means for something to be public. From Angela Merkel’s hands to protest graffiti on city squares, from Herbert Bayer’s designs to E-flux announcements, all of these find tactile representation in the installation and can be touched.

On the last day of the exhibition, artist Tamara Kuselman will present her performance Free Fall in response to Pittas’s installation. Performers Oneka Phon Schrader and Louis Vanhaverbeke will investigate the space and activate the installation. Rather than maintaining a firm grip, she suggests letting go and falling freely to experience weightlessness.

An SMBA Newsletter will accompany the exhibition 'Antonis Pittas – hold' on with an introduction by Joram Kraaijeveld (assistant curator SMBA) and an essay by independent curator Galit Eilat. This newsletter is bilingual (Dutch/English) and available for free at the exhibition, or as a PDF on this website.

Tamara Kuselman (Buenos Aires, 1980) obtained her MFA at the Sandberg Institute in Amsterdam. She has had solo exhibitions at Jeanine Hofland (Amsterdam, 2014) and Sala Muncunill (Terrassa, 2011) among others. Her performances include The Schizophrenic prop at Guest Projects (London, 2015), Don’t let your heat slip away at CA2M, (Madrid, 2014), Still live with Blackcocks at De Appel Arts Centre (Amsterdam, 2013), The Power of Now, Rita McBride’s “Blind Dates” in MACBA (Barcelona, 2012). She has participated in group shows such as “Collective Fictions” at Nouvelle Vagues at Palais de Tokyo (Paris, 2013) and “The Suspicion of Suspense” at Trafó Gallery (Budapest, 2012) among others. In 2014 she was a resident at The Banff Centre in Canada. In 2015 Kuselman was awarded the Generaciones grant from Fundación Montemadrid in Spain.