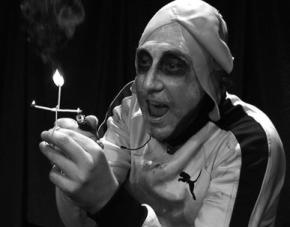 Nathaniel Mellors (GB, 1974) presents his large-scale multi-media installation Giantbum in his debut solo exhibition in the Netherlands. The piece premièred earlier this year in 'Altermodern' at London's Tate Britain, curated by Nicolas Bourriaud. Mellors has expanded the installation especially for the show in Stedelijk Museum Bureau Amsterdam.

Taking language, the most important means of social interaction as his starting point, Mellors has created a visual spectacle which leads the viewer through the various phases of a script. As theatrical as it is absurd, the script relates the course of an expedition that set out in the year 1213. A band of starving explorers is trapped within a giant's body. Sent off by his followers the group's spiritual leader, The Father, attempts to find a way out through the giant's entrails. The Father returns to the group 'born-again', having survived by cannibalism and coprophagia (eating faeces). He 'recycles' himself and becomes potentially everlasting. This leads to reflections on his ontological situation and has bad implications for his followers as he becomes increasingly cultish and manipulative, claiming the group is not lost inside the body of a Giant, but inside the bowels of God...

The dramatic narrative is embedded within a framework of word play, punning and fragmented dialogue in which any realistic grasp of the matter gradually breaks down and becomes impossible. Both the characters in the piece and the linguistic structure Mellors positions them within become self-referential.


Two versions, or phases, of the script are presented in two different video registrations. One is a theatre version, performed and filmed in an empty theatre, the other a rehearsal filmed in an empty school. These diverse performances reveal the breakdown of language, underlining its ability to articulate and express external reality. The sense of progressive destabilisation is iterated in the architectural structure of the installation surrounding the viewer. The route through the dark system of corridors with the two films terminates in a daylight-filled space where animatronic heads cast from one of the actor's heads perform a new phase of the script, which also includes a choral chanting of "Freedom" just at a time when all hope of escape seems frustrated.

Mellors has drawn inspiration from films such as Pier Paolo Pasolini's Salò (1975) and numerous science fiction classics, although his primary concern is the contemporary context where linguistic manipulation - by politicians, spin doctors, the media - is ineluctable. Catchwords such as those recently in the headlines: 'crash', 'crisis', 'pandemic' - all drastic terms for events barely experienced or felt by the reader. Language creates a world of its own, a strength yet nonetheless a hindrance that Mellors, with a fine eye for visual detail, systematically questions.

In Stedelijk Museum Bureau Amsterdam Mellors has added an extra chapter to Giantbum: The Preface. This involves a performing sculpture that claims authorship of the installation beyond itself as well as the ability to 'explain' the work and its own position within it, critically and philosophically through a series of 'demonstrations'.The sculpture points at various drawings, diagrams, emblemata and sculptures made of coal and mucus. It attempts to find a voice for its observations - that the diagrams and carbon sculptures are 'pictures of thought' and the mucoidal sculptures are models of the universe and representative of a god for all belief systems... This scenario is partly responding to the timing of the show's coinciding with the Amsterdam festival 'My Name is Spinoza', in which SMBA is also involved.

Nathaniel Mellors studied at the Ruskin School of Drawing and Fine Art, Oxford University and the Royal College of Art, London. He recently completed a residency at the Rijksakademie, Amsterdam. This year, Giantbum was seen in the exhibition 'Altermodern' in Tate Britain and is currently exhibited in a different form at Centro Cultural Montehermoso in Vitoria-Gasteiz. Mellors is participating this year in the New Forest Pavilion at the Venice Biennale and the Contour video biennale in Mechelen. Mellors' work is also represented in the collection of De Hallen in Haarlem.

The exhibition is accompanied by the free SMBA Newsletter (NL/EN) in which the artist discusses the ideas behind Giantbum in conversation with Nicolas Bourriaud. John C. Welchman, Professor of Modern Art History in the Visual Arts Department at the University of California, San Diego, has written an essay response to Giantbum especially for the Newsletter in the form of an abecedary-in-progress titled "Abecedarium (A Fragment)".

Giantbum is a co-production with:

Preface is co-produced with Stedelijk Museum Bureau Amsterdam and is possible thanks to The Netherlands Foundation for Visual Arts, Design and Architecture, known in the Netherlands as Fonds BKVB.