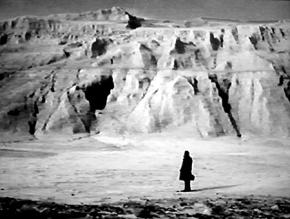 There is something unusually ominous about the films and videos of the Argentinean artist Sebastian Diaz Morales. So far, Diaz Morales has completed around 40 video productions. Some are experimental, others seek recourse to a semi-documentary approach. In general the productions have a narrative structure and the artist develops a story from small, simple ideas. The circumstances or stories that from the screen are transmitted to our visual consciousness are never comfortable or comforting. With varying degrees of involvement we observe a feverish world that incessantly draws us in tighter, only to throw us back again in a rhythm that is syncopated by false starts. Compared to the fast lane of contemporary visual culture, Diaz Morales' films are neither slow nor fast seeming rather to emerge from a rapid succession of a gamut of slownesses that together open onto a heterotopian elsewhere. 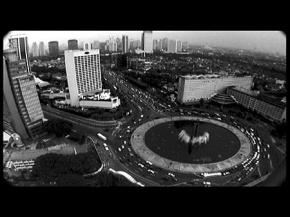 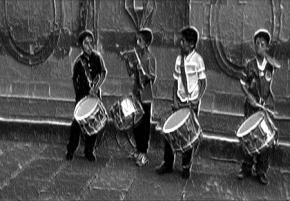 We find Diaz Morales flirting with different distinct genres: documentary, epic film, narrative pamphlets, short film, filmic essay and poetry overlap in continuously shifting balances sorted out between reality, fiction and reality as it is subjectively perceived, filtered or analyzed. In a vortex, Diaz Morales is able to blend these layers into a very personal contemporary film practice. Its richness is astonishing, the more so when we discover that what is being presented to us are home movies that technically require little more than what can be found in an average household: a video camera and a computer.

A man wearing welding glasses jogs past the camera through a vast landscape. His footwork has been accelerated in the editing process, and the runner outpaces the scientist, Cano, who is looking for the place where the last wind of the West will blow beyond the 46th parallel. The jogging character calls himself 'Metaphor' and is doomed to forever keep moving. No one is ever to stop him and 'de-metaphor' him. We encounter the scene in Diaz Morales' only feature film, Paralelo 46° (1998, 56 min.). The film was completed in record time on a tight budget in Central West Patagonia. Cano's quest in the Patagonian region is set in an imaginary landscape dotted with the remains of an oil drilling activity from a by-gone age. The camera pans across huge expansive vistas, mountain landscapes and dry gullies but the presence of polluted drilling rigs rapidly transforms the scene into an infected idyll that sums up our contemporary contradictory world in a dialectically polarized image. Like the jogging metaphor, Diaz Morales' images are constantly on the run - in a single image but also in the diachronic time span of the film. The result is a richly coded and fractal filmic progression that, like the jogging metaphor, is constantly moving on the spot or moving from point to point. The films of Diaz Morales are continuously passing from a concrete geographical or socio cultural context to a fictitious elsewhere. 15.000.000 Parachutes (2001, 25 min.) was shot in Indonesia's capital, Jakarta, and reads as an allegory of the circumstances (pollution, commotion, social poverty) in which the majority of the population are forced to live - 60% of the estimated 15,000,000 inhabitants is unemployed and faces a future holding little to no prospects at all. The Indonesian motion picture has a repetitive structure and portrays the cyclical existence of the people of Jakarta in the wanderings of one parachutist who leaps from the top of the national monument every day in search of a habitat. Virtuoso, inventive camerawork entraps the viewer into a metropolitan filmic essay that with humour and inventiveness remains suspended between a light fairytale, travelogue and social commentary. Persecution of the White Car (2001, 25 min.) was realized in the same year, triggered by a workshop in Durban, South Africa. The South African video portrait is more threatening and reads as an indirect but probing topography of an imminently unstable social context. Compared to 15.000.000 Parachutes, the South African travelogue is leaning closer to a narrative pamphlet and is introduced with an image shot from high in an airplane. The camera looks down on an amorphous layer of thick cloud that seems to erect a concrete wall between the worlds above and below, separating recollections from projections and from experiences. On the spot, the camera rolls ceaselessly and hurriedly, in an attempt at capturing something that would otherwise escape or no longer be comprehensible, and for that reason must be filmed. In a whirlwind of perceptions and eliminations, Persecution of the White Car develops a singular story about an elusive place and a glance reflected like sunlight on the white lacquer work of the car in the title. Reality exerts upon the camera like a magnet. For some things, the shutter is wide open while for others the camera is subject to a centrifugal force and the focal point in a reverse magnetism is far off-screen.

In Diaz Morales' films the camera is open for chance although we can only guess where the facts seamlessly converge and where the director's hand was needed. Diaz Morales' film practice is precisely rooted in short-circuiting calculated coincidence with a more distant and conflicting montage of fictional filters, self-reflexive speculations and narrative scripts added to the filmed material, or elicited from them to imprint our visual consciousness with a complex meshwork of concentrations and contra points.

The Apocalyptic Man (2002, 22.30 min.) is a fictional story built up out of gratuitous and coincidental footage. We now find ourselves in Central Mexico where Diaz Morales spent six months filming. The place's daily routines are largely devoted to religious processions, cock fights and parties which Diaz Morales registered as prime subject matter. Later, the images were linked to passages from the novella "Los Siete Locos" (1929) by the Latin American writer Roberto Arlt. The text is added to the edited material as a catalyst. The perfect blend of layered meanings retrospectiveley seems to enable Diaz Morales' camera to project scripts onto reality. In narrative terms, The Apocalyptic Man entangles us in the compulsive paranoia of a man on the run from reality, enemies, or his own conscience and the dizzying images reveal to us a dystopic vision that, stone by stone, seems to close ever tighter on its creator. There is no possible escape - should the world go up in smoke or should the myopic leading figure itself dissolve. Arlt's protagonist - like his spiritual father - ends up putting a bullet through his head. The Apocalyptic Man postpones deliverance in a lingering restlessness that remains a latent bomb at the core of society.

Water, Box, Handkerchief, Dress/Undress and Force are five productions from 2003 which together with The Enigmatic Visitor (2003, 17 min.) will be presented at the exhibition in SMBA. The semi-documentary style of 15.000.000 Parachutes and Persecution of the White Car are stripped of their referential functions and traded in for autonomous video images edited into loops. The five tableaux confront us with sometimes absurd, but mainly existential themes. We find ourselves back in Patagonia where Paralelo 46° had already been featured earlier on, but in contrast to the futuristic archaeology that Paralelo 46° proposed as a dystopic nod to the present, in Water, Box, Handkerchief, Dress/Undress and Force the contextual space dissolves in a vacuum. We encounter two people with only a couple of props (a box, a handkerchief and sundry garments) fighting against an invisible factor: the wind. With the purified form the five scenes allow for Diaz Morales to achieve the concentrated eloquence and visual power of the Japanese Haiku: a woman is crying, standing in the midst of an arid steppe landscape, a man beside her. The wind wails unstoppably. To dry the woman's tears, the man gets out a handkerchief but a powerful gust of wind tears it from his fingers, leaving it fluttering in a bush further away. The man frees the handkerchief but pricks his finger on a thorn and winds the handkerchief around his finger to stem the blood. The tears and the wound, the blood and the tears and the wind and the thorns overlap in a ceaseless concentration of meanings (Handkerchief, 2003).

Apart from the formal differences, the series of five films is expanding on Diaz Morales' earlier productions taking the degré zéro of human existence yet a step further. The threat that in previous films was inextricably bound up with a socio-cultural background is constricted to an elementary play of forces in an apart from that undefined landscape. From now on we must imagine a world without familiar landmarks. Man as the god of prosthesis in Sigmund Freud's "Civilisation and its Discontents" (1930) is, even without his mechanical aids, no longer the wellhead of an oceanic feeling and all he can do is attempt to survive his own historical condition. For the exhibition the five scenes are complemented by The Enigmatic Visitor, a panoramic recording of a dialogue between a soldier and a scientist - for the dialogue, Diaz Morales again returns to the work of Roberto Arlt. The two strike up a conversation about chemical gases in an abandoned radio station. In the war the soldier had felt the impact of the gas and the scientist wants to build a chemical plant for large-scale gas production. Now and then the image is being interrupted. A huge magnetic field in the radio station cellar sucked down pixels during filming and the optical disruptions seem to prelude the disintegration of the image or our eyesight.

After The Apocalyptic Man Diaz Morales draws on the Roberto Arlt novel cycle a second time for The Enigmatic Visitor. The first book, "Los Siete Locos", is the most unusual as it historically anticipates a social turnaround in Argentina that will drag on for several years. In the book, Arlt describes seven individuals who lose their faith in reality and, in an underworld of immorality and depravity, devise a demonic plan to unrelentingly overturn reality. One year after the book's publication, in 1930, Argentina fell prey to a state coup that lasted 13 years, and was known as la decada infame. In his fascination for this particular transition in Argentinean history, Diaz Morales focused on the invisible germination of restless dissent and projected it onto today, and onto another place. Where in the beginning we proposed that the work of Diaz Morales is ominous, the link with Arlt reveals a dystopic dimension that we can now detect in all Diaz Morales' productions. The majority of the films are set in a fictive present after all, and link concrete social contexts in a alarmingly obvious way with a latent sense of unease about a not so distant future.