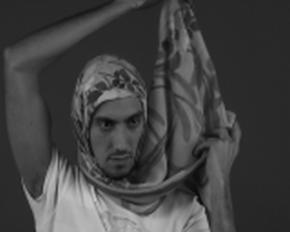 The title of the exhibition L’enfer, c’est les autres (Hell is other people) is derived from a remark, which appears in the play Huis clos (No exit) by the French philosopher Jean-Paul Sartre. The remark can be regarded as the motto of this existential play, which considers the paradoxical relationship that people have with ‘the other’. The exhibition is constructed on the same model as the play: a male and two female artists are brought together in a closed room with no windows or mirrors, and are destined to relate to one another. The three artists assume the position of 'the other', and show that ‘hell’ exists not only as an external, but also particularly as an internal threat. From different centres of political turmoil, in fact they display a universal constant that is manifest in a variety of social contexts, namely that the governmental protection of the ‘own’ culture can equally take on militaristic or even menacing forms. The artists in L’enfer, c’est les autres, the Turkish Köken Ergun (Istanbul 1976), the Bosnian Sejla Kameric (Sarajevo 1976), and the Israeli Gal Kinan (Beersheba 1971), are the actors in this broad cultural/political discussion. 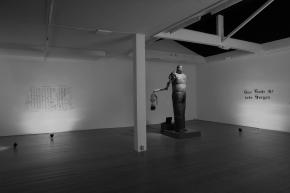 The works shown by Köken Ergun in SMBA, examine different aspects of the relationship between religion and the state in Turkish society. The issues surrounding the Islamic headscarf are represented from a personal perspective in the work Untitled (2004). In the video, we see the artist trying out different ways of wearing the headscarf until he eventually bursts into tears. I, Soldier (2005) shows that the summum bonum of the secular state, freedom of speech, is sometimes maintained in an ambiguous manner. Ergun filmed the militaristic ceremonial of the May 19th celebrations, the national holiday for Turkish independence. The tightly orchestrated movements of schoolchildren, but also the facial expressions of an individual soldier in slow-motion, are reminiscent of a totalitarian display of power from both communist, as well as National Socialist systems.

Sejla Kameric’s work Bosnian Girl (2005) reveals the fragile position of the Bosnian cultural identity, not only in the Yugoslav context, but also in the eyes of the Western ‘protector’. The work is a poster, which was spread around the public spaces in various European locations, on which racist graffiti is written over the portrait of an attractive young woman (Kameric herself). The text reads ‘No teeth, a mustache, smel like shit? Bosnian girl!’ It originates from the Muslim enclave in Srebrenica, and was written by a Dutch soldier. This work is given a broader context in SMBA. Kameric collected a variety of graffiti texts, left behind by Dutch soldiers in Srebrenica, which she applies to the walls of the exhibition space. The graffiti gives a painful account of the ambiguous role that the Dutch army played in the protection of the Muslim minority in Bosnia, and more generally they question the issue of security within one’s own culture.

In her work, Gal Kinan addresses the relationship between the individual and the state. Her key point of departure is the militaristic, patriarchal tradition of Israeli culture. Father (2006) is a motorized sculpture that explicitly represents the dominant position of the father figure. The imposing concrete sculpture, which delineates a male figure in an abstract modernist style, is particularly conspicuous for its large, mechanical ‘robot-arm’ that flings around a loosely knitted girls’ doll. The pre-programmed movements of the figure at first appear violent, but in their repetition, they reveal an undisclosed tragedy: the inability to break free of the decorum of traditions. Her new video work Reviving Pleasure (2007) shows the feminine side of this situation, and interprets the (female) body as an inappropriate tool.

The exhibition L’enfer, c’est les autres is curated by Nathalie Zonnenberg, independent curator and critic based in Amsterdam.