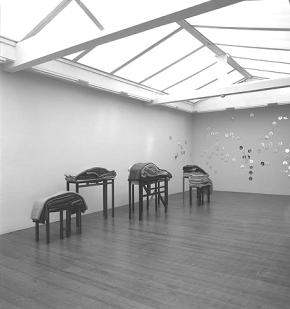 A common feature of the work of Célio Braga, Iris Eichenberg and Suska Mackert is their conceptual approach to the phenomenon of jewellery and, more widely, to objects associated with people and the human body: charms and talismans, amulets and fetishes. Each of them explores, in different ways, the cultural significance – in a personal sense and in the public domain – of objects that are attached to the human body. Thus in the work of Célio Braga, approaches to the body and the symbolic meaning of individual parts of the body figure prominently. His work alludes to religious representations of the body, votive images, and related universal fears and desires.

Suska Mackert expresses her art in a variety of media. She is interested in codes and rituals, emotions and customs, even rules of etiquette revolving around a particular piece of jewellery or other object. This interest has also inspired her to build up small typological collections. For instance, she has previously studied ritual forms of distinction, the wearing of ‘decorations’ as signals of merit. In another project she studied images of jewellery as logos, focusing especially on the socio-psychological significance of body ornaments in the era of globalisation.

However different these artists’ work may be in terms of form, material and application, they all interpret jewels/objects as ‘materialized mythology’. From this vantage point, jewellery is a collective term for magical objects, which serve to allay fears and to cherish desires and fantasies. It is this meaning that prevails; other meanings that the objects may have, as a means of distinction, or an expression of taste or fashion, are either irrelevant or are thematised, as in the work of Suska Mackert.

Célio Braga has chosen to exhibit a three-part installation, consisting of a floor work measuring 4.00 x 4.00m, a cartoon video and a photograph. The title, Full Blown, is ambiguous: it evokes something or something in full bloom, but at the same time it refers to the moment at which a frequently fatal disease such as cancer or AIDS emerges in its strongest or most developed form. The body’s mortality and the vulnerability of existence are represented by a poetic shroud of countless pale wax flowers. The field consists of thousands of flowers, their combined weight equalling that of the artist – 65 kilos. Each flower has been cut out and shaped carefully and with infinite patience from wax plates that the artist moulded and hardened himself, as a result of which their hues go from translucent to opaque. Braga has previously worked with ephemeral, perishable substances such as soap and human hair. Wax has a rich iconography in relation to the body, sickness and death; its best-known uses include portraits of the dead and death masks. In the past, the plasticity of wax also made it an ideal material from which to fashion naturalistic anatomical models used to teach medical students. In Christianity the most vivid expression of the link between wax and the human body was in naturalistic votive images of afflicted parts of the body, presented in supplication – or gratitude – for a cure. The white pallor of the wax flowers can be construed as an allusion to purity and sexuality. Because of its origins – from chaste bees – wax was historically regarded as a pure material, symbolic of the sacrificed Corpus Christi.

Not only in its choice of material but also in its form, the installation conforms to the tradition of the iconography of death. The flowers are those of the grave, while the field is a shroud. The film loop is based on the close-up of ceramic flowers adorning a gravestone in the famous Paris graveyard of Père Lachaise, which is a separate part of the installation. Animation alludes here figuratively to the intimate link between life and death.

Eichenberg’s contribution consists of a triptych entitled Heimat. Colourful blankets are draped over a line of wooden structures stretching for several metres like an undulating panoramic vista. Facing this are film images of a blurred hilly landscape. On the wall between them hang dozens of small circular mirrors in a random pattern. Into each little mirror an image of a human figure has been scored, a silhouette showing only head and shoulders. Here, as in Braga’s work, the semantic quality of the use of materials and the constructed form make up a close-knit entity in which the work’s significance unfolds. Thus it is not difficult to construe the blankets as a metaphor for the shelter of the home, the warmth of the nest, the security of the family. Finally, the bed itself symbolises the life cycle, the beginning and end of life. Fabrics, and wool in particular, have long held a special appeal for Eichenberg. The hearts knitted with red wool, more like organs than objects, the final work she produced for her Master’s degree ten years ago, were the first public testimony to her fascination with amulet-like objects: dark and magical, lifelike and seductive. Later on she made high tables that she dressed in knitted woollen ‘socks’ and coverings with turtle necks reminiscent of pullovers, endowing these tables with a corporeal quality as if they might come to life as in myths or fairy-tales. The tables in the Heimat landscape are also animated; their form derives from the characteristic structures of timber-framed buildings. Eichenberg grew up in an old timber-framed farmhouse of this kind, amid the traditional rural life of mixed farming. The farm had wheat fields and barns with pigs and cows, bulls, geese and chickens to be slaughtered for the dinner-table. The rhythm of the seasons, with the cycle of the work on the land, is reflected in the slowly shifting images of the film: a series of farmland scenes photographed at different speeds and subsequently played back as gradually surfacing memories.

The wall with mirrors confronts viewers with their own recollections of those they know, of close relatives and extended family, loved ones, friends, old classmates and neighbours – the countless relationships that accumulate in human life. Heimat is not just a personal memorial but also an image of the universal longing to return home, to the safe haven, the place where one belongs. It is a topical theme in a restless era with its excessive individualisation, globalisation and its growing numbers of people who have left their country of origin in hope of forging a better future elsewhere.

The work of Suska Mackert distinguishes itself from the other two by taking jewellery and its impact as the object of her explorations. And it is in this impact that the magical element recurs, for Mackert too looks on a body ornament as a magical object, a vehicle for expressing wishes and desires. For this presentation she made a wall installation stretching for several metres – a text consisting of almost 2,000 medallions of silver and tombac. The text – which is also the title of her work – is ‘Ce souvenir sera toujours mon guide’ (‘This souvenir will always be my guide’). It derives from a medallion that is presented to Catholic children when they take their first Communion. Devout Catholics wear medallions venerating the Virgin Mary or another saint (sometimes their name saint) on a little chain around their neck. Medallions of this kind are offered for sale at every pilgrimage church, and their production must be a million-dollar industry. The installation subtly expresses the ambivalence of faith and the medallion’s role: the text appears twice: once in thin, shadowy letters corresponding to intimate personal experience, and once in a massive form and in enormous profusion. The technique of the work exhibits an interesting parallel with that of Célio Braga. For Mackert made every medallion herself, a truly painstaking task, as in the case of Braga’s thousands of flowers. Her time-consuming work, requiring infinite patience – activity known in Dutch as ‘monnikenwerk’ (‘monks’ work’) – acts almost as an adjuration. This highly deliberate manner of production acquires added meaning when we recall that in monasteries such minutely constructed products were devotional objects used to focus attention during prayer (monks were not permitted to spend their time in ‘idleness’).

In the work Languesco sole latente, too, a text serves as a guide for reflection. It is a motto belonging to the emblem of a flower in a sixteenth-century emblem book. The literal meaning of the motto is ‘I languish when the sun is hiding’. The explanatory caption reveals that both sun and flower should be construed in a religious context: the light stands for God, and the flower for the individual human being. The emblem and motto inspired Mackert to produce a modern Andachtsbild, a peepshow for a moment’s contemplation amid the hectic pace of modern life.

Suska Mackert has the ability to perceive in everyday situations noteworthy associations, the meaning of which is not immediately apparent but which, converted into her personal imagery, acquire a magical significance. Thus in a variation on objets trouvés, she exhibits three found sentences that, stripped of context, acquire a baffling quality. The most curious of these is ‘Kirschblütenrosa Kostume tragen die damen, eierschalenfarbene Anzuge die Herren’ (‘The ladies wear cherry-blossom pink costumes, the gentlemen eggshell-coloured suits’).

In 2002 all three artists participated in the exhibition Display, in which they explored the limits of their art. The SMBA show is a sequel to that exhibition. This space gives them a new arena, with its own scope and above all its own public. It was the belief that their work deserves to be displayed in a more spacious context, precisely because it breaches existing boundaries, that prompted the SMBA to invite them here.

The exhibition will be accompanied by a publication containing texts by Renée C.Hoogland, Melle Hammer and Peter van Kester. Graphic design by Coppens and Alberts.