Paintings and Drawings / Now or Never

The exhibition of paintings and drawings by Lucy Stein, on display this autumn at Stedelijk Museum Bureau Amsterdam, also marks the commencement of a weekly performance by duo Anat Stainberg and Norberto Llopsis Segarra. Although the two presentations are separate, they do have one thing in common: a fascination with the physical. 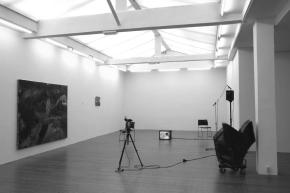 The performance ‘Now or Never’ by artist duo Anat Stainberg and Norberto Segarra, coming from the Amsterdam institute DasArts, takes place over seven weeks. Similar to a soap opera, it comprises different episodes each of which hinge on the intimate relationship between the two performers. But the bourgeois patterns that lie at the heart of the soap are rapidly ruptured as the duo involves disciplines other than the soap, such as dance, theatre, and performance art, where fact and fiction are so perpetually interchanged that they are impossible to separate. This effect is compounded by the monitor, which functions as part of the set and screens footage from other ‘episodes’.

The work of Lucy Stein consists of character sketches of women and femininity, sometimes infused with blatant self-mockery, sometimes with an all-pervading sense of darkness. The large painting Bobs V Waves (2006) depicts a slew of women and girls: the stereotypical London career woman, the cool schoolgirl and, prominently featured, a portrait of Betty Boop, a burlesque comic female figure who featured in early animation films. Another large canvas shows an extrovert young woman gazing pityingly at a respectably dressed girl with the speech bubble ‘one touch of humour would have saved her from such comprehensive suffering’.

In her work, Lucy Stein seems to regard an entire generation with compassion: the generation that judged on the basis of appearances and the feminist yardstick. But Stein prefers to redirect our attention to the source. Deploying an array of figures blended with contemporary hedonism and a hefty dose of humour Stein reveals abiding sensitivities and fears. But more important, perhaps, is her painterly touch: the way she renders a breast to resemble a distant city, or transforms a bare leg into a hill. Such surrealist, landscape-like elements are flush with romanticism. The search for immediacy and purity on the canvas takes on a literal weight in her work with the use of collage-like elements such as the realistically painted fragments of Evian mineral water labels which surface through the compositions in the form of cheery little flags and arcane letters. It is literally a return to the source, to a visual language where romantic longing seems to triumph over scepticism and feminism is confuted.

Lucy Stein (Oxford, 1979) recently completed her residency period at De Ateliers in Amsterdam. She is also part of the duo Blood ’n Feathers (with musician Jo Robertson), which was recently nominated for the British Beck’s Futures Award.