Stedelijk Museum Bureau Amsterdam presents two exhibitions and an essay. Independently of each other they scrutinize aspects of Dutch culture and confront cultural classifications and their seeming certainties. 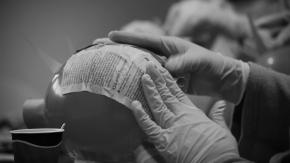 The video The Paradox of Being Taken Seriously by Bart Groenendaal was filmed during therapy sessions with traumatised refugees who have either been granted, or are awaiting, asylum in the Netherlands. Learning about Dutch culture is part of their supervised trauma recovery therapy. As the film unfolds, it gradually reveals the workings of a subtle power game between the Dutch therapists and their African patients and the emergence, with no evident provocation, of a growing uncertainty regarding the therapists’ unquestioning assumptions about certainties concerning their own country. The therapists are subtly compelled to look beyond national boundaries.

In his essay in SMBA Newsletter nr. 127, cultural theorist and theatre maker Quinsy Gario examines a Dutch classic: Wim Verstappen and Pim de la Parra’s 1971 erotic blockbuster ‘Blue Movie’, famous primarily for its emphasis on free sex and explicit scenes. Blue Movie marks a key moment in the Netherlands’ increasing perception of itself as a sexually open and tolerant nation; an image that emerged in the 1970s. During this time, decolonisation also became final, when Suriname achieved independence in 1975. Subsequently, many Dutch nationals of Suriname descent migrated to the low countries, coinciding with the peak of the influx of labour migrants, referred to at the time as ‘guest workers’. Gario analyses Blue Movie against this background and, through a detour among post-colonial theory and research, raises a number of criticisms of the much-acclaimed Dutch self-image.

Created independently of each other, Ruitenbeek and Groenendaal’s exhibitions and the essay by Gario, share common ground. The step from ‘Blue Movie’ to Kim Holland is not so big and fits within a historic trajectory of claiming cultural freedom. By the same token, the position of the actors in Ruitenbeek’s film is not dissimilar to those of the asylum seekers in the Groenendaal video. Gario articulates such paradoxes in his essay. As a whole, it tests our capacity for tolerance. Do we accept Groenendaal’s self image? Can we stomach Gario’s critique of Dutch national cultural heritage? And, despite porn’s vast online presence, what do we think of a work by Ruitenbeek on the cusp of porn and art?

In Project ‘1975’, Stedelijk Museum Bureau Amsterdam seeks to find other value systems in art. The current presentation by Gario, Groenendaal and Ruitenbeek is a pause for introspection within this programme. This time, attention turns to the Netherlands. Project ‘1975’ will shortly travel outside national boundaries with the exhibition ‘Hollandaise’ by Senegalese curator Koyo Kouoh and an SMBA exchange exhibition in collaboration with the Nubuke Foundation in Accra (Ghana).

The exhibition of Gario, Groenendaal and Ruitenbeek is accompanied by SMBA Newsletter nr. 127 with an introduction by curator Jelle Bouwhuis, a contribution by cultural theorist Annelies Bijvelds on the work of Ruitenbeek and art theorist Joram Kraaijeveld on the work of Groenendaal. Quinsy Gario is Project ‘1975’ guest contributor.

The exhibition is partly made possible with support from the Mondriaan Fund.