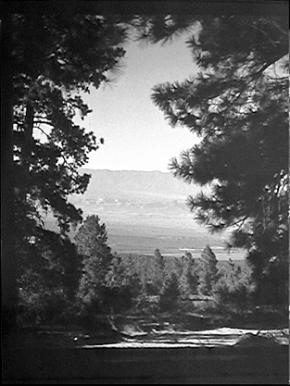 I am unable to get accustomed to the temporal aspect of video art. Every time I encounter a monitor or a projection at an exhibition or in a museum I experience a certain reluctance to stop and watch. To begin with, watching usually means waiting until the current session has finished. Then the video has to be started again and only then does one get to see the work unfolding during the period of screening. I wonder at the automatic assumption that the viewer will stand around waiting patiently for whatever is to be presented to them. I prefer the immediacy of a painting which does not change after the first glance but continually presents its constant, unvarying image. It is up to the viewer to spend time trying to fathom its meaning. He (or she) can try to deduce the length of time the painting took from the rhythm and tempo of the brush strokes; or he can relive the maker’s concentration in the careful balance of the composition and look for evidence for his conjectures in preparatory studies and revisions. These were my first thoughts when, during my visit to Rob Johannesma’s atelier, I saw the arrangement of monitors and a video beam. After a few moments, however, it became clear that the video I was viewing was different from the kind that are usually shown in this medium. The projection time was not the time during which an event on the screen took place. I was looking at a stationary image. Only after a while did I notice a slight shifting movement which, though continuous, concerned only the projection, not the subject.

The vertically aligned video presents the picture of a tree and branches on which the camera zooms slowly in and out. After a while, this movement changes into a slow shift within the picture. Very gradually it becomes clear that the tree is being pulled apart to reveal a distant horizon. The transition from close up to far away appears to obey different rules from those governing the familiar optical illusion with a single vanishing point which makes one wonder whether it has been filmed using a moving camera fitted with a zoom lens when in fact the video came about quite differently. Rob Johannesma made two slides of the same landscape fifteen metres apart. He placed these slides one on top of the other on a light box mounted below a video camera which he allowed to zoom in and out on the double image. Then he slowly moved the top slide to the right over the stationary bottom slide until it disappeared out of frame. Gradually the vista of a sun- bathed landscape comes into view and remains in shot for three minutes after which the camera zooms in on the distant horizon. All this time, the tree has remained at the extreme left-hand side of the picture, a constant point of reference. Its presence is so emphatic that I am reminded of the classic motif of the repoussoir used in painting and stage scenery. This compositional device suggesting depth, which found its way into photography via painting and postcards, is now so well established that everyone uses it in their holiday snapshots without a notion of its artistic origins. The image of the tree against the distant plain brought to mind Cézanne’s paintings of Mont Sainte-Victoire seen from Bellevue. In a painting in the Courtauld Institute in London, a pine tree ends the picture on the left-hand side while on the right-hand side, open plain continues uninterrupted right up to edge of the frame. The branches of this pine tree, which stand out against the sky, merge with the branches of another tree whose trunk is not visible in this painting. In another painting in the Mont Sainte-Victoire series (in the Phillips collection in Washington), however, this other trunk does appear and anchors the picture plane on the right. Comparing the two paintings in cinematic terms, one could say that in the London painting the painter has ‘zoomed in’ on the subject. Apart from the reference to the time-honoured compositional device of the repoussoir, it seems to me that the quotation of Cézanne in this medium of moving photos is not without significance. After all, it was Cézanne who in the 1880s found a way out of the impasse of Impressionism. The Impressionists, with their rapid rendition of gradations of light and colour analogous to the alternation of cloudy skies and patches of sunlight, had found a painterly answer to the advent of photographic image-making. This led them to a virtuoso naturalism, but also to the dead end of art for art’s sake. Cézanne was one of the first to reexamine the possibilities of a static image based on an idea and not on the accidental and rational perception of natural phenomena. He stopped looking with the eye of a painter- photographer and instead returned to classical painting, to Poussin for example. In the latter’s The Funeral of Phocion in the Louvre, Paris. The landscape, with its succession of ground-planes, is conceived as an expression of serene resignation, as a metaphor for the funeral.

Cézanne tried to combine an ideal vision of the landscape with an impressionistic rendition of nature. This is essentially paradoxical and as such, the motivation behind his painstaking research can only be observed in the paintings it inspired; it cannot be spelt out logically. Characteristic of these landscapes is the moment at which Cézanne stopped working on a painting even if the canvas was not entirely covered with paint. It was finished when his eye told him that a number of antitheses had been resolved: the antithesis between a clear-cut form and its materialization in light and colour, between the illusion of a light-filled space and the physical presence of paint strokes on the canvas, between his painterly ordering and the order governing the landscape. Thus it is Cézanne who comes to mind when I look at Rob Johannesma’s video work, precisely because of this combination of landscape motif and photography. Another obvious comparison is with Straub and Huillet’s documentary film ‘Cézanne’ which was shown in the Witte de With gallery in 1991 and in which images are held stationary for ages while a voice-over presents a reconstructed dialogue with the artist. It demanded a large measure of good will on the part of the viewer to pay attention for longer than ten minutes. Rob Johannesma’s video of moving photos appears to be more effective than that combination of stationary pictures and words. He seems to act out what a painter like Cézanne saw or still sees when sitting in front of a landscape and letting his eye travel back and forth between what he sees and what he reproduces, taking the time to be without thought, simply looking and finding his need for order reflected before his eyes in the landscape he is looking at.

The time factor in the work of Rob Johannesma coincides with the time I experience as a viewer of actually moving pictures of the landscape. Artists have often remarked that it is possible to ‘see yourself looking’. Unlike when you listen to music, you are aware that looking itself has a form, independent of whatever you are looking at. Our gaze has been shaped by artists and photographers. In the wake of the Impressionists, for example, we started to notice that shadows may sometimes be blue. We are able to experience colour symbolically, in the manner of Gaugain. The gesture of a woman grieving over the death of a son killed in battle may recall a composition by Goya. A photographer recognizes this and captures it. For a brief moment art and reality, natural gesture and pose, seem to coincide and this gives the photo an artistic pretension that puts it on the front page of the newspaper. What counts as beautiful is well-known and is recognized as such. Now that it is possible to manipulate pictures perfectly using the computer, the photograph has lost its reliability as historical evidence. The pretence of ‘this was how it was’ can no longer be sustained, the photograph too has become an illusion. This also means that the earlier conclusion, that we see reality via the eyes of photography, is due for revision, unless we accept that reality has a surreal quality. The relation between reality, the representation of reality and we the observers/actors, has to be established over and over again. The question now is: what does the world look like after photography? Followed by: how does the answer differ from the answer Cézanne found to the question he asked himself, namely, what does the world look like without photography? Rob Johannesma’s video articulates this problem.