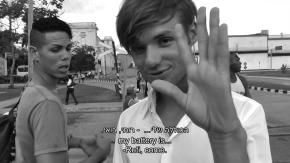 *The exhibition can be visited from February 7

By means of video documentation and through intense personal involvement in various real-life situations, Ruti Sela investigates issues with authority, sexuality and nationality in front of and through the possession of a handheld video camera. With this strategy, she explores the complexities of power in human relations. In her work the camera is both a recording device to document these relations as well as a commanding instrument that mediates individual struggles for recognition and domination. The exhibition, the first retrospective of Sela’s work, is produced in collaboration with Museums of Bat Yam (MoBY) in Israel. The Exterritory Project will be discussed in an annex to the exhibition. This ongoing project was initiated by Sela in collaboration with Maayan Amir in the form of an alternative platform for artistic exchange outside the confines of nation-states. The Stedelijk Museum Amsterdam will host a symposium on extraterritoriality on 15 March 2015.


Many of Sela’s works take encounters with friends or strangers as their starting point, as these often engender a struggle of dominion and seduction, especially in the presence of a video camera. The eye of the camera is a means of control over one’s presence and image that Sela uses to document various human interactions in a way that lays bare the mechanisms of oppression and temptation inherent in every encounter. In Beyond Guilt #2, for instance, made in collaboration with Maayan Amir, Sela arranged several meetings in a hotel room with Israeli men via a dating website. The men had come prepared for a sexual encounter, but instead found themselves caught in an interview about the influence of military service on their sex lives. This video suggests that cultural identity is a produced and oftentimes forced position in relation to others, as people are always subject to the view of others. In the other eight works on display at SMBA, other personal encounters are registered and reveal social mechanisms of domination.

With the Exterritory Project, the acts of screening and distribution of video are what is important. Since the onset of this project, Sela and Amir have attempted to distort and question territorial thinking and to look for ways to imagine, explore and articulate extraterritorial spaces, outside of the control of sovereign powers. This project originated in September 2009 during an event held on board three sailing boats in trans-boundary waters in the Mediterranean Sea, where over fifty artworks were presented. Since the first screening, Sela and Amir have explored various conflict-ridden areas as alternative conceptual and geographical spheres for artistic and discursive exchanges that bypass the laws of territory and nationality. One of the things that this project elucidates is that citizenship, like identity, is not something that one can own or choose, but is a status that is forced upon someone by a higher authority. Sela and Amir won the 2011 Young Artists Award from UNESCO for this project.

An SMBA Newsletter will accompany the exhibition Ruti Sela with an introduction by Joram Kraaijeveld. This newsletter is bilingual (Dutch/English) and available for free at the exhibition, and as a PDF on this SMBA website. In addition, the monograph Ruti Sela: For the Record will be published in conjunction with the exhibition at SMBA. For the Record, edited by Joshua Simon and published by Archive Books, includes texts by Yair Garbuz, Julia Moritz, Eduardo Thomas, Ana Teixeira Pinto, Vít Havránek and Joshua Simon. ISBN 978-3943620276. The book will be on sale in SMBA, price: € 18.

The Exterritory Project Symposium in the Stedelijk Museum Amsterdam will bring together artists, scholars and curators to explore the various conceptual and geographical spaces exterior to the laws of nation-states and beyond the modern geopolitical division of the world. The symposium is a further continuation of the Exterritory Project, initiated by Ruti Sela and Maayan Amir. It aims to encourage both the theoretical and practical exploration of ideas concerning extraterritoriality in an interdisciplinary context.

Ruti Sela (b. 1974) graduated from the Bezalel Academy of Arts and Design, Jerusalem and the Department of Film and Television at Tel Aviv University. Together with a group of fellow Bezalel graduates, she ran the ‘Artattack’ and ‘Cordova’ video magazines for cable television in Israel between 2002 and 2004. Throughout 2011, she was a guest resident at the Rijksakademie in Amsterdam. Her work has been shown internationally at various exhibitions and venues, including the 2006 Bienniale of Sydney, the 2009 Istanbul Biennial, the 2010 Berlin Bienniale, Manifesta 8 (2010), Israel Museum, Centre Pompidou, Kadist Art Foundation, Art in General (New York), Tel Aviv Museum, TATE Modern and Jeu de Paume. The Exterritory Project will participate in the New Museum 2015 Triennial: Surround Audience. Sela has been awarded a number of prizes and scholarships, including the Minister of Culture Prize and the Anselm Kiefer prize. The exhibition at MoBY and SMBA is the first retrospective of her work.

The exhibition Ruti Sela is generously supported by the Embassy of Israel in the Netherlands.