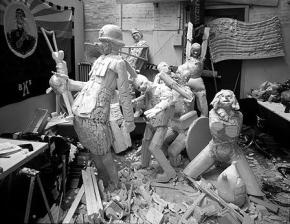 The landscape unfolding before the eyes of the visitor to Bureau Amsterdam could easily be described as ghastly. On a cool-blue, wintry hill, a number of blue figures in a shattered condition seem to have been frozen into an ecstatic pose. Their attributes quickly reveal them to be soldiers. Their gruesome, dishevelled appearance and the madness emanating from their faces betrays a desperate and inglorious retreat. Their only goal now appears to be an igloo-like structure in which other equally chilling figures sit. This shelter does not look very inviting and the figures look as if they are returning home from a cold fairground. Folkert de Jong has given this Styro- and polyurethane foam scene the enigmatic title The Iceman Cometh. It is a title that evokes a plethora of associations, but which also unequivocally points to the horror genre.

In 1996, De Jong had a studio in the western docks of Amsterdam. A desolate environment with cranes and warehouses - a perfect location for shady and unpalatable goings-on. He certainly did not feel at ease there, but he became fascinated by the lost shoes and porn magazines he came across near his studio. Then one day he found a bag containing a woman's clothes, letters and stilettos. He took it back to his studio and examined it. Like a true detective De Jong tried to deduce what had happen to the owner of these items. Through feeling and smelling the artefacts, De Jong began to feel more and more as if he had become involved in a crime. The tension this generated led him to make a reconstruction of her body. He draped her clothes around a wooden skeleton. The skeleton was covered in foam rubber taken from a mattress and tied up with tape. De Jong started to make more of these dolls until his studio became filled with all kinds of potential crime victims held together by foam rubber and tape. Video recordings he made of these figures and himself as he lay 'victim-like' in the back seat of a car clearly demonstrated that these dolls could lend themselves perfectly to a more narrative structure.

Once he began at the Rijksakademie in Amsterdam, De Jong started to make scenes using all kinds of materials; scenes that revealed worlds that appeal to our darker nature. In a range of installations he created moods which refer to the unheimlich, the uncanny or weird. This notion of the unheimlich dates from the second half of the eighteenth century, when it was used by philosophers like Edmund Burke to describe the dark side of the sublime. Sigmund Freud developed a psychoanalytic reading of the term in an essay from 1919. According to Freud, the unheimlich, the uncanny, is very close to the heimliche, or familiar: whenever feelings of safety and security are frustrated or crudely suppressed, the entrance to the more sinister and obscure compartments of the subconscious is never far away. It is precisely this close proximity of the orderly, sunny side of life to an existence full of dark urges and unprocessed events that is a constant source of fascination for De Jong and which forms an important point of departure in his work. Significant sources for him are stories in which often reserved characters suddenly manifest themselves as Frankenstein-like figures. For instance, De Jong read a book about a small community in the United States where a man, who called himself The Bishop, founded a semi-religious cult in which he sacrificed fellow villagers. This information all fed the first tableau De Jong made at the Rijksakademie. The sterility of the environment immediately demanded the creation of a personal domain. In his studio De Jong built a small, wooden house in which he, his brother and friends performed all kinds of shady rituals. The video recordings of these events were shown at one of the first public presentations of his work. The images of a girl lying with a bag on her head, a figure dressed like a toy doll and De Jong - the undisputed leader holding a pistol and wearing a jacket bearing the words 'The General' - appeal directly to everything we seem to associate with a very dark, base romanticism. Besides these images there was also the place, the small house, where the events took place. In the house were the discarded doll's costume and a bed in which a sawn hole seemed to embody the passage to the nether regions. On the wall hung flags bearing mysterious, private symbols and embroidered, secretive names like 'The Bisshop', 'Miller', 'Lacy'. On the front of the house was a clock, its hands turning at great speed. This strange world also acquired an extra, sublime dimension through the electronic organ in the house, which had its keys taped down. The penetrating base tones of the organ were fed through speakers, filling the space, as if appealing to unholy undertones in the viewer. De Jong managed to create a sinister, mystifying, semi-sacred ambience which reflected his experiences of Amsterdam's dockland and the world of his books.

Curiosity recently took him to the United States where, in the desolation of Arizona, he hoped to find the world of his imagination. Certain elements - warning notices, large fences, deserted houses and supermarket shelves full of pistols - seemed to symbolize this world, but didn't directly affect De Jong. He began to realize that the most exciting images were in his mind, which gave him an enormous sense of power. With this understanding he began to call himself 'The Manipulator', a name which also serves as the title to a number of installations (the one with the house, and a later, almost identical tableau with a church). It is also inspired by stories in which the leaders of sects often adopt a symbolic name.

In the late nineties, imitating dark places, using names like OThe Bisshop¹, OThe General¹, OThe Manipulator¹, the monotone, penetrating organ music, and the flags with symbols were the most important aspects of De Jong's unheimlich universe. In some ways this world is similar to those of American, West-Coast artists like Mike Kelly and Paul McCarthy, although De Jong maintains his own, distinct idiosyncrasies. At a certain point Folkert de Jong realized that the institutionalized world of the Rijksakademie was no longer stimulating. Real experiences seemed to be excluded, his work remained too theatrical and had too much distance from reality. He decided to go on an expedition and bury himself in the garden of the former cavalry barracks in which the art school is housed. After much digging and with the help of a wooden support structure he managed to create an underground space in which he stored his belongings, including a record player, the famous organ, a surveillance camera (which had also documented his digging) and a walkie-talkie. He then lived there for a couple of weeks. The tent which had been used to cover the hole while it was being dug now made way for a trapdoor, aerials and PVC pipes, which exhaled clouds of smoke generated by a machine. In this isolated place De Jong wanted to stir up and, above all, intensify the emotions that had already suffused his earlier installations. He wanted to amplify his sense of himself as protagonist in his invented world so that he could further improve his communication with the outside world, something you always have to do as an artist. While he was digging he wore work overalls with the name 'The Great Communicator' sewn on them. To stimulate his sense of power even more, he hired a Napoleonic cavalry uniform and regularly wore it whenever he played the organ or walked with a flag or walkie-talkie around the grounds of his temporary shelter. In an earlier performance, the sense of authority that underlies sadistic regimes moved De Jong, wearing an American police uniform, to hold a pistol in firing positions and to adopt the stances typical of authoritarian behaviour.

Around this time, the middle of 1999, his focus shifted in some ways. He became more enthralled by the horrors of the two world wars. In particular he became fascinated by the paradox, especially in relation to the First World War, that such a gruesome battle could have been fought with what to our eyes seem such primitive means. The extremes of living underground seemed have moved him to a very special experience: beforehand he could not have imagined fighting a war or spending long periods in trenches. For his final show at the Rijksakademie, using the wood from his other installations, De Jong built scaled-down German A7V tank. This vehicle, decorated in Maltese crosses and which there were only ten of in the First World War, stood with its tracks to the outside wall of the school. This positioning embodied the urge for freedom he unmistakably felt: the walls had to come down.

De Jong's increased concentration on the two world wars may be seen as a continuation of his exploration of the darker human passions. The image of such a roughly constructed tank with thin, almost decorative Maltese crosses, and on which soldiers stand happily waving struck him. It says something about humanity's guilt - and its innocence. Visiting army surplus stores full of parachute equipment and military uniforms, or costume-hire companies that carry Nazi uniforms, defy his imagination. In the spring of 2000, in the cabinets of the Vleeshal at Middelburg, and under the mysterious title De Ilemauzar, De Jong visualized a whimsical world full of potential destruction. Following bike rides in the area around Middelburg and visits to the many bunkers in this region, he decided to build a bunker containing a small lamp and a paper aeroplane made from a pizza box. Behind this was a space with a wooden reconstruction of a German WWII Stuka plane, all kinds of other handmade weapons (machineguns, handguns and so on) and many flags bought at army surplus stores onto which he sewed caricatures of soldiers and strange names like 'Sack en Sugar', 'Griezell Greedigutt' and 'Pecke in the Crowne'. These names, like 'Ilemauzar' come from a seventeenth-century English story about the world of a witch hunter and represent the different characters the devil could occupy in the story. The visual cacophony in the cabinets of the Vleeshal was drowned out by noises which seemed to be emitted directly from the artist's own head: knocking, drilling, cracking and, once again, organ sounds. In this cheerful, gruesome cabinet, human obsessions were once again enlarged upon; the inclination towards evil and the extermination of - and always, by definition 'other' - evil were central to this work.

De Jong continues to be fascinated by the depths of the human soul, the bizarre twilight zone that everyone seems to carry within them. In The Iceman Cometh the installation nature of his work to date gives way to a more sculptural approach. The consequential reduction of materials has led to a greater coagulation of concentration. Important sources of inspiration for this work were the paintings and drawings of George Grosz and Otto Dix - which express the madness that lies concealed within every human being - and photos of troops returning from the front. A drawn self portrait of Otto Dix in a trench (from 1924) made a great impression on De Jong. It clearly shows the complete insanity of war and the transformations that people undergo through it.

In The Iceman Cometh, the viewer is witness to a still from a gruesome story. You can only stand at a distance, if necessary walk around the tableau, but, unlike earlier work, you can no longer physically move in De Jong's world. The crazy dance the characters seem to be performing concisely communicates what he was looking for in the other installations: a compressed experience of frustrated desire and constraint, which easily slips into madness and horror.