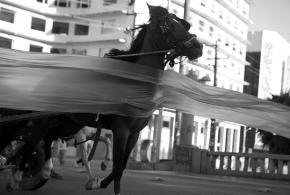 The Right to the City

For The Right to the City guest curator Madelon van Schie selected work by seven artists from Latin America. The works all examine the use of urban space and life in the city in their own way. The artists see themselves as allies of the marginalized city dwellers of Buenos Aires, Lima, Mexico City, Recife, Santa Cruz de la Sierra and Brasilia, respectively. With that alliance as their point of departure, they deal with themes including the relation between the centre and periphery, squatting and self-construction, and the design and use of the city. Each and every one of the artworks included in the exhibition is a unique, often unexpected, and sometimes playful contribution to what ‘the right to the city’ means.


Latin America is the most urbanized region in the world, where 80% of the population live in a city. The exponential growth of many cities in Latin America during the second half of the twentieth century led to tensions between official and unofficial urban development which remain a constant in the region down to this day. It is in part as a reflection of this that ‘le droit à la ville’, a concept enunciated in 1968 by the French philosopher and sociologist Henri Lefebvre (1901-1991) from which the title of this exhibition is derived, has become highly influential in Latin America. The core of the concept is the basic right to access to space and to participate in urban life.

Presently this concept is also understood in a broader sense. For instance, the social geographer David Harvey argues that the ‘right to the city’ encompasses much more than just access to the city and full participation in urban life. It also includes, he suggests, the right to change yourself by changing the city. The Right to the City connects principles of this sort with the work of the seven artists both to illuminate the present situation in Latin American cities, and to provide examples of different ways in which an alternative use of the city could improve the lives of city dwellers.

Jonathas de Andrade’s video The Uprising will have its première in this exhibition. The work is a record of a clandestine horse race through the orderly, modern city centre of Recife, and the effects this race had there. The installation Lembrança de Brasilia by Laercio Redondo, which is comprised of a mural, printed panels and other elements, refers back specifically to the construction of Brazil’s capital. With his floor sculpture Salta Charcos Oscar Abraham Pabón, presently a resident at the Rijksakademie, provides a possible model for greater equality between residents in the centre and the outer neighbourhoods of a metropolis. In similar ways, all the works play with picking apart the power relationships that define the construction and representation of the city.

Madelon van Schie (1982, Amsterdam, The Netherlands) is an art historian who obtained her research master in Latin American studies at the University of Amsterdam. Previously she has been working as an independent (co)curator on the exhibition ‘May Your Wish Come True’ (2012) en ‘Into the Green’ (2011). Next to that she is co-author of Notities van Onderweg (2012), a publication about the life and work of Dutch artist Cornelius Rogge. In cooperation with the CEDLA she is working on a contribution for a publication on the changing society in Lima under the title The New Face of Lima. Patterns of Cholification. In this article she focuses on the influence of these societal changes on contemporary art in Peru.

‘The Right to the City’ is accompanied by SMBA Newsletter nr. 132, with an introduction by Madelon van Schie and contribution by Christien Klaufus. The SMBA Newsletter is bilingual (EN/NL) and available for free in SMBA and as pdf on www.smba.nl.