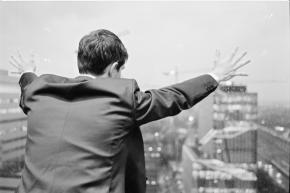 This Spring Stedelijk Museum Bureau Amsterdam is being given over to the work that Nina Fischer and Maroan el Sani realised during their five-month-long residence in Amsterdam’s South Axis (Zuidas). The South Axis is an economic focus in the development of Amsterdam as a city and, with its future connections with the high speed rail link to Brussels and Paris and its favourable location close to Schiphol International Airport, is particularly attractive to large banking and insurance conglomerates. The residence, an initiative of SMBA in cooperation with the Professorship of Art and Public Space and the Zuidas Virtual Museum, gives international artists the possibility of working some months at, and responding to this specific location.

The Berlin artist duo Fischer/El Sani were the first to be invited as residents. In 2001 they had begun with a series of projects and installations regarding the former East German Palast der Republik. The building had been deserted since 1990 and the interior completely stripped to rid it of asbestos. For a long time, the building languished in an ambivalent twilight world with a powerful lobby campaigning for complete demolition and the rebuilding of the old city castle. On the other hand supporters pleaded for its reconstruction as a monument to the Communist utopia once embodied by its futuristic 70s interior. Fischer / El Sani explored this shadow zone, speculating on potential contemporary uses for the building, such as a night club, that are a more accurate reflection of the Wende’s legacy to the city. In various installations they juxtaposed these different states of what could be meant with ‘the utopian’.

Since this project, the modern and modernist building that bears the unmistakable traces of the era of Grand Narratives has been pivotal in the work of Fischer / El Sani. The duo filmed in the former Rundfunkzentrum in Berlin, where propaganda radio plays were once made and broadcast for the East German Republic, the old Bibliothèque Nationale in Paris and in the headquarters of the French communist party designed by Oscar Niemeyer. The aesthetic films that resulted contain surreal incidents which make frequent playful references to the illustrious past of avant-garde film by directors like Resnais, Antonioni and Tarkowski – filmmakers in whose work emptiness and anticipation play a vital role.

Fischer / El Sani’s project on the South Axis of Amsterdam also concentrates on the complex relationship between the formal language of a building, the psychological effects that has, and the political-economic reality which forms its setting. Specifically, it was the recently delivered Viñoly building which caught their eye. These office towers, named after the American architect Rafael Viñoly, have a characteristic, randomly ascending ‘fissure’ in the façade, which from a distance creates the impression of a ziggurat. In reality, the cleft is a stair by which the office workers can descend quickly along the outside of the building in case of emergency.

The new film installation The Rise plays on this. While passenger planes fly low overhead in the background, the protagonist of the film tries to reach the top of the tower, to attain heaven. His tiring trek however leads to nothing more than perplexity and unease. To what this unease must be attributed remains unclear: to the anonymous, inaccessible modern architecture, or to an external threat? Jeroen Boomgaard, Professor of Art and Public Space, writes in his essay in the SMBA Newsletter:

‘He seems driven by an exigency without purpose, an ambition without desire. He climbs onward in an almost perfunctory manner, and his anxiety appears to be prompted by the top rather than the abyss. He is driven on by the fear of never achieving the heights, but possibly he is filled by anxiety about the void that awaits him there. In his exhausting trek he is the perfect example of the ideal office worker, a subservient member of the expensive-suit proletariat for whom the way to the top is the only option.’

In addition the Professorship for Art and Public Space presents 'the Classroom', a series of lectures, with guest speakers Fischer/El Sani.

Nina Fischer (1965, Emden) and Maroan el Sani (1966, Duisburg) have worked together since 1993. As a duo, they have participated in numerous exhibitions, including the Gwangju biennales in Korea in 1995 and 2001, the Berlin Biennale of 1998, the 1998 Liverpool Biennale, Manifesta IV in Frankfurt, 2002 and in the Yamaguchi Center for Arts and Media in Japan. ‘Palast der Republik’ was recently presented in the Hamburger Bahnhof in Berlin.

Nina Fischer & Maroan el Sani – The Rise is to be seen in Stedelijk Museum Bureau Amsterdam from March 18 through May 13, 2007.

The free SMBA Newsletter (No 97) accompanies the exhibition with contributions by Jelle Bouwhuis, curator of Stedelijk Museum Bureau Amsterdam, and Jeroen Boomgaard, Professor of Art and Public Space at the Gerrit Rietveld Academy, Amsterdam.

The South Axis residency by Fischer/El Sani was a collaboration with the Professorship of Art and Public Space and is part of the ‘Zuidas Free Spaces AIR Project’ of the Virtual Museum Zuidas. See also www.lkpr.nl and www.virtueel-museum.nl"

The Rise was made possible in part by financial contributions from the Amsterdam Fund for the Arts and Medienboard Berlin-Brandenburg GmbH.

For more information and press images: