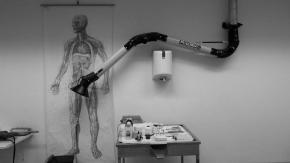 On Thursday, 19 January, an exhibition by the artist duo Kel O’Neill and Eline Jongsma opens in the Centrum Beeldende Kunst Zuidoost. In the exhibition they will be showing their video installation Empire Bakermat (Meanwhile in Holland), the outcome of their residency in Amsterdam Zuidoost in connection with BijlmAIR. Empire Bakermat is a part of their more comprehensive Empire project, which began in 2010 and investigates the unintended present-day consequences of Dutch colonialism.

With the Empire project, O’Neill and Jongsma are going to Asia and Africa in search of ethnic, cultural and spiritual traces left behind by the traders and colonists of the Dutch East India Company (VOC) and the Dutch West India Company (GWC). Empire began as a series of four non-fiction video installations, shot and shown in Sri Lanka, Indonesia, India and South Africa. Brazil, Suriname and Ghana are still to follow. In the intermezzo Empire: Bakermat, which is now being shown in the CBK, the artists investigate the relation between The Netherlands and the rest of the world from an unusual location: The Netherlands itself.

Empire: Bakermat (Meanwhile in Holland) weaves together two documentary story lines which play out in and around Schiphol. Theo is responsible for the mortuary at Schiphol. Each year he coordinates the transport of about 2000 bodies to and from The Netherlands. Many of the deceased are Dutch citizens who were born elsewhere, including in former Dutch colonies. Their last wish was to be buried in their country of origin. The mortuary, and Schiphol itself, is a globalized version of the mythical Styx river, and Theo is the ferryman Charon who helps the dead with their passage.

In the meantime, on the edges of Schiphol, Dutch airplane spotters camp out with their cameras and binoculars to see their favourite planes take off and land. From the flat landscape the airplanes glisten as symbols of liberation.

In addition to Empire: Bakermat O’Neill and Jongsma are also showing the film Empire: 29º00' S, 24º00' E, which was made in Orania and Cape Town in South Africa. In this work they trace the stubborn persistence of a Dutch song in the local oral culture.

You can follow the Empire Project on sinisterhumanists.tumblr.com and look at images from the films on vimeo.com/empirelegacy.

The work of Kel O’Neill (US) & Eline Jongsma (NL) explores the boundaries between art, film and journalism. They have recently had shows and screenings in the Michael Stevenson Gallery (Cape Town), Jogja National Museum (Yogyakarta), WORM (Rotterdam), the Amelie Art Gallery (Beijing), and at the Los Angeles Film Festival and Apex Art (New York). They also work as video journalists for VPRO Television, The VJ Movement and NOS Journaal op 3.

The Empire Project is made possible in part by the Mondriaan Fund, and the National Archive.

BijlmAIR is the joint residency project of SMBA and the CBK Zuidoost, in the Amsterdam's multicultural Zuidoost District.