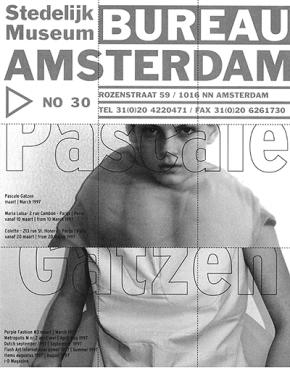 
To make a statement about Pascale Gatzen is to take a risk. The complexity of her work and the context within which she presents it certainly contributes to this. However, the real risk lies in the fact that every statement seems to destroy the lightness and transparency for which she strives. A conversation with Gatzen has many of the characteristics of a shadow play. Not that she lacks clarity. On the contrary, few designers are able to talk about their work in such a nuanced way. The difficulty is the implicit hesitation that dominates the conversation. Each word is one too many, to heavy and therefore in conflict with her aim.

This dilemma is characteristic of designers who -like Pascale Gatzen- are too aware of the context within which they operate. Gatzen, however, goes a step further. Fashion as an industry is not her primary interest. Neither does she intentionally tread the fine line between art and fashion in the way her colleagues Viktor & Rolf are so convincingly able to do. Pascale Gatzen approaches fashion as a formal system and moving first and foremost within the immaterial world of thought. The tangibility, the materiality of her product would appear to contradict this, but this is an illusion. Besides, her 'clothes' are never products in the classical sense of the word. Her clothes are three-dimensional constructions within which one can literally and figuratively lose one's way.

But how does this understanding relate to Pascale Gatzen's desire for lightness? The answer is simple. The relationship is a difficult one, as her last project illustrates - the project that took form in collaboration with Bureau Amsterdam. Photographs of clothes made by her were placed in fashion magazines such as Dutch and I-D. Clothes, model, photograph, magazine; at first glance there seemed to be nothing that did not fit within the usual framework of fashion. But appearances can be deceiving. Behind this facade of normality a complex lie was being perpetrated. Gatzen's clothes and the photograph turned out to be reproductions, but not reproductions in the usual sense of the word. Gatzen meticulously remade the clothes from the photograph and then re-photographed them. The original photograph of the clothes and the photograph of the material image of the photographed clothes, were both placed in the magazines.

Gatzen as the director of a sophisticated staging; the clothes as a labyrinth; the magazine as a riddle. Gatzen called this complex intervention a 'horizontal skip in time' rather than the 'vertical (evolutionary) movement' normally associated with the design process. Her description is of course a euphemism, though one that is thoroughly illuminating. She does not present herself as a designer of the latest developments in fashion. She neither forms a new beginning of a development, nor an endpoint. She positions herself -alongside the stylist and the photographer- in the role of an interpreter of a design.

The development of this project has a long history. Whoever has been confronted with Gatzen's work knows of her fascination for the space between the clothes rather than the clothes themselves. A fascination that was given form when she consciously designed the space between the body and the clothes, whereby the external shape became interpreted as a left-over. This time it is also the space between the things that engages her, that forms the subject of the work, though her interest has shifted from the relation between the body and clothes, to the relation between fashion and the media. She spoke of a desire to no longer confront herself with basic items of clothing, but almost to allow herself to be provoked by designer clothes. The only question was how this could be accomplished.

An attempt to work with items of designer clothing was thwarted by production restrictions. It was simpler to approach the confrontation through the media, in particular the magazines. However, it occurred to Gatzen that the magazines do not present collections but repeatedly show the same piece of clothing from a single collection. Not a dress by Comme des Garçons, but the dress; not a jacket by Helmut Lang, but the jacket. Through a desultory selection process it appeared that certain pieces of clothing were allotted the honour of acting as emblems for the whole collection. It also became clear to her that this dress or that jacket was not simply presented, through being interpreted by the stylist and photographer, but was presented to the public in an idealized way. In other words, our view of designers and their collections is fragmented and above all fed by the interpretations of stylists and photographers.

For Pascale Gatzen, the question is not whether this is good or bad. By reproducing (remaking) a photographed design by, for example, Martin Margiela, and then re-photographing it and presenting it in different magazines, Gatzen above all makes us aware of this process of creation, selection and interpretation. At the same time she reveals a finely meshed network of mutual dependencies that reaches far beyond the relation of the designers to their products.

The value of this project lies largely in the exposure of this mechanism. But this was not all that happened. By reproducing a photographed piece of clothing, a shift occurred between the original object and the representation. A shift that more or less strips the original design of its functionalism and thus emphasizes its abstraction. Through Gatzen's mutation, even a conceptual piece of clothing like Martin Margiela's became more abstract. A distortion that only became really visible when Margiela's design and Gatzen's reproduction were seen side by side in, for instance, Maria Luisa in Paris. This abstraction combined with her contextual way of working unquestionably makes her interesting to contemporary fine art. But does it also make her interesting to fashion? Not necessarily, since fashion is barely, if at all, interested in abstraction, neither does it care to make the casual, underlying processes explicit. Yet it is precisely this that makes Pascale Gatzen important to fashion. An importance that goes beyond theoretical questions of meaning or context. While fashion seems to be imprisoned in its own history, Gatzen demonstrates that there are still paths that lie open. By ridding fabrication techniques of their functionality, she introduces an aesthetic that is truly unique. A quality that people both inside and outside the fashion industry were convinced belonged to the realms of the impossible. Her own position within this discussion is clear: 'I do not believe in clothes versus fashion, or in fashion versus art. I believe in the realization of your potential, in the defining of space in relation to things'.