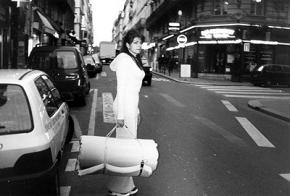 Suffering from lonely nights? Phone the Dreamkeeper. She's in town for forty days, wandering through the streets with her sleeping mat wearing her Star Dress and Moon Shoes. lf you make an appointment she'll come to you. For twelve hours she'll stay by your side. As long as you don't sleep, she'll watch. In the morning she'll pick up her mat and leave again. Don't ask what will happen in the period in between. lt all depends upon your dreams. The Dreamkeeper, the latest project by the Spanish artist Alicia Framis (Barcelona 1967) is a work in progress. Beginning in Bureau Amsterdam, it will be continued abroad later this year. This work is characteristic of Framis's own particular interpretation of art. She believes that the potential of art objects to communicate emotions and thoughts is limited. She is utterly convinced that as an artist she can best reach her public through direct emotional and physical contact. This is why she produces as few art objects as possible and creates the conditions for unusual and personal experiences. Her work has been called 'social sculpture' or 'new performance art'.

Superficially her work, shares a number of characteristics with the tradition of performance art that developed in the 1970s. More than twenty years ago, Marina Abramovic too placed herself at her public's disposal. She stood naked in a gallery. On a table beside her lay an assortment of objects including a loaded pistol, and yes, one of the visitors picked up the gun and held it to her head, though he didn't pull the trigger.

The Dreamkeeper, like Abramovic's work, is also a live performance by the artist which creates the conditions for direct human - and possibly physical - contact. Both artists place themselves in vulnerable positions, never knowing what might happen or how they will respond. But this is as far as the similarities go. The intention behind Framis's 'new, social performance' is not to test or break down her own boundaries, other people's or the boundaries of art. lt is also not her intention to enrich art with a new form of expression. In her search for 'art that gives life' she addresses her public directly. She searches for what 'the people of today', lonely people in the big city, 'need', depending on the situation and the place. As far as she is concerned, these are neither 'dead things" like art objects or sculptures on plinths, nor metaphors or grand gestures. What is needed is intimacy, content, imagination and poetry. The form and aesthetics of her projects - not forgetting the publicity surrounding them - are, of course, all paid the necessary attention. But she repeatedly emphasizes that content and personal interaction with her public are of primary importance.

This vision has its limitations. Her contribution to Festival a/d Werf in Utrecht was the work Compagnie de Compagnie, an escort bureau at Utrecht Central Station where lonely travellers could acquire a companion to accompany them on their trip to one of the festival's locations. The escorts were all identical twins - experts at togetherness. The work existed for the duration of the festival. The only tangible remains left at the end was the poster for Compagnie. The Walking Monument, with which Framis won the Prix de Rome at the end of last year, had an even more limited life span. A 'tower' of people stood on the Dam Square in Amsterdam on the location of the National War Monument for exactly one minute. Here too the artwork was an experience. Everyone present participated either as an acrobat or as a member of the immediate circle of spectators who functioned as a kind of plinth for the piece or as elements in the spectacle. In this case too, apart from the odd photograph that was taken without Framis's involvement, all that remained of the work was the memory of an unusual gathering, the stories, and of course the thoughts provoked by this 'sculpture’: thoughts about what a monument might be in a democratic society such as ours. These projects are extremely problematic for museums because they cannot be preserved. But if it were left to Framis, her projects would never be more fixed in form than this. Consequently her work is only temporary and limited to a small group of people. In other words, she makes elitist work. But Framis doesn't view this as a problem. She doesn't believe in art for a 'broader public' or in the so- called eternal value of paintings and sculptures. She argues that only direct experience is valid and that dead objects can never communicate that experience. 'Life's rnagic can only be expressed in the experience of an intense moment that will never return. Artists may want their work to have eternal value, but they too are just ordinary people who are not in a position to contravene the laws of nature.' In today's art world, with all its objects, theories, exhibitions and overflowing depots, such an opinion comes like a breath of fresh air. Framis's projects preserve themselves, living on as stories. The Walking Monument and Compagnie de Compagnie have taken on mythical proportions in casual conversations. The Dreamkeeper is a follow-up to Compagnie de Compagnie. The poster has to stimulate the myth into life in advance. lf all goes well it will prociaim: The Dreamkeeper is in town! This time Framis is also making a concession to the material character of the exhibition space. The poster should serve as tangible proof of her project which, because this is a solo exhibition, would mean that Bureau Amsterdam's exhibition space would remain empty for a whole month. To prevent visitors from leaving the space with the feeling that they had come for nothing, Framis has decided to show something of her nocturnal experiences. Apart from her sleeping bag of Dreamdress material, Framis will also take a camera obscura into the space. Each night, this box-with-a-hole will record twelve hours of communication without words, without the intervention of reason or the metaphor of language. The primitive photographs taken by the camera obscura will be developed in Bureau Amsterdam and hung in the exhibition space. In this way the exhibition will develop and grow throughout the duration of the show. The sound piece Loneliness Architecture will also be played during the project. In this piece a number of actors read out dreams that refer to universal human emotions such as ambition, love, loneliness - emotions that Framis will certainly encounter on her night-time journeys to record dreams.

Framis's primary intention is not to establish a theoretical relation to recent art history. Her work stems from a personal need. But she does address THE questions facing today's younger generation of artists. What is the purpose of art in today's society? What can an artist mean? Why should an artwork by definition be material? And should all art by definition be accessible to everyone?