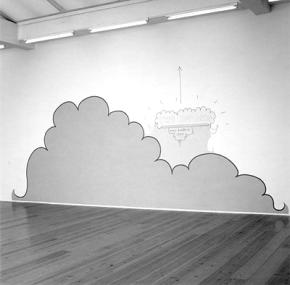 Lily van der Stokker has often said that she is not a daughter of the sixties, that the 'explosions of love', brightly coloured flowers and psychedelic frills in her work have nothing to do with a flower-power revival. And yet she responded enthusiastically to Bureau Amsterdam's suggestion to exhibit three wall paintings alongside works from the 1960s. Together with curator Leontine Coelewij, she selected works by Daan van Golden, Wim T. Schippers, Martial Raysse and Niki de St. Phalle from the Stedelijk Museum's collection and a video by Yayoi Kusama from a private collection. Why the sixties? 'Because they are nice and colourful. Isn't it enough for art to be just that? Where's it written that art has to be deep and meaningful? Can't art just be simple, or nice and cheerful?'. [1]


Lily van der Stokker received international recognition in the beginning of the 1990s with her large-scale wall paintings. These were striking for their 'girlie' imagery, effusive, fluorescent colours and amusing, sometimes nonsensical texts (Hoi, Kissy-Kissy, Wonderful). In interviews she has said that her research areas are love and pleasant imagery and that 'good girls' are a source of inspiration for her.

Some interpret Van der Stokker's boundless optimism and (apparent) naivety as provocation. Does she want to mock the rigorous abstraction of Sol Lewitt or the rigid conceptualism of Joseph Kosuth and Lawrence Weiner? She is not interested in ambiguous or cynical comments. She would rather make work that instantly appeals 'to the heart, not the head'. The title of one of her wall paintings for Bureau Amsterdam is Art is Easy -to understand'. This can be read as a wish to communicate directly with the public. 'Art is Easy - to understand' relates to my desire to make things that can be understood by everyone.' This anti-intellectual approach to art is also characteristic of the work of some of the artists Van der Stokker has selected. In Daan van Golden and Wim T. Schippers she sees a typically Dutch fascination for the normal and the everyday. 'I draw much of my inspiration from the boring, everyday world', Van der Stokker said a couple of years ago. [2] This could also have been said by Wim T. Schippers who installed his first solo show in Museum Fodor, Amsterdam (1962-63) as 'rooms of the truly uninteresting'. 'The texts in my work often present unnecessary, factual information; information that is important to no one, like the wall painting This building was built in 1994', (originally designed and executed on the outside wall of the Art & Public Gallery in Geneva in 1995). As with rumours, you wonder whether or not these texts are true. 'I am 42' is the text in a wall painting she made last year in London. The text for Bureau Amsterdam reads 'Lily + Jack have been living together for 10 years'. Even when enlarged to 2m x 3m, the wall paintings still retain the appearance of spontaneous sketches, intimate notations that seem intended for no one's eyes but those of the artist.

In a highly individual way, Daan van Golden makes his private life, his family and familiar things around him part of his work: scrapbook-photos of Brigitte Bardot, snapshots of his daughter Diana, collages made from flowered paper. Van Golden's Compositie met Blauwe Ruit (Composition with Blue Check) is a checked handkerchief or tablecloth, as well as being a geometric, abstract composition.

Similarly, Robert Indiana plays with the contrasts between the abstract and the figurative. Indiana used to take texts and numbers from the street and advertising, strip them of their context and meaning in his paintings and thereby transform them into pure images. 'That's what appeals to me in Indiana's paintings. In my work too I want the texts to function first as images and then as things with meaning. People first have to see the texts and then read them.' In the same year that Robert Indiana painted the numbers six and eight as readymades, 1965, Elaine Sturtevant had her first solo exhibition in New York with such works as John's Flag, Warhol Flowers, Oldenburg Shirt and Stella Concentric Painting. By meticulously copying famous art works by her contemporaries (installations and films - which she completely restaged - as well as paintings), she raised the debate about the relation between the original and the replica. In 1969 she made twentyfive copies of Martial Raysse's Peinture à Haute Tension, a painting that was based on a found photograph. The work led to a controversy in the French press about whether or not Sturtevant had plagiarized Raysse, though her way of working was no more than a logical extension of the work of her male Pop-Art and Nouveaux-Réaliste colleagues who were re-using images taken from the media. 'A lot of avant-garde art comes from the need to provoke, but I believe that there is also a strong human need to amuse oneself and have fun.' The light-hearted attitude that characterizes Van der Stokker's work can also be seen in Martial Raysse's work Encore un instant de bonheur, the childlike drawings of Niki de St. Phalle and the poetic and playful actions and happenings of Yayoi Kusama. The video Kusama's Self Obliteration (1967, the year in which she also painted green and red polka dots on a stark-naked Jan Schoonhoven) documents a number of her painting performances. Kusama did not limit herself to the canvas. She went outside and painted colourful, decorative, dot patterns on trees, horses, river water, herself and others. In other works she covered utility objects and pieces of furniture in soft, phallic protuberances. The influences of Zen and Zero as well as the sexual and feminist revolutions are clearly visible. Obsessive and psychedelic, her work was able to thrive in the cultural climate of late-sixties New York. However, after returning to Japan she was committed to a psychiatric hospital and disappeared into anonymity. Disillusioned, Martial Raysse also withdrew from art. Niki de St. Phalle moved into the commercial world and the lucrative business of designing children's playgrounds. Like Kusama's, Van der Stokker's work goes beyond easel painting. Painted directly onto the wall, the paintings become part of the architecture of the exhibition space and sometimes comment on it, as in This building was built in 1994. Other works decorate the wall with an all-over pattern against which other pieces may be exhibited. (In an exhibition in Cologne in 1994 a painting by Peter Halley was hung on a flower wall by Van de Stokker.) Sometimes the wall paintings work as backdrops against which all kinds of things can happen. Recently they have been shown in combination with pieces of furniture. 'This comes from my desire for people to sit in the work. The couches are about the need to build things around people.'

1. Unless stated otherwise, all quotes by Lily van der Stokker are taken from an interview with Leontine Coelewij, 16 July 1998. Translated by Annabel Howland