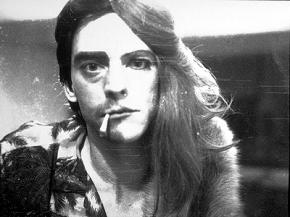 In 1973 Ulay made a number of colour Polaroids of a nude woman with a guitar. Her body is slim, but at the same time muscular, almost like that of a man. The curves of the guitar that she grasps echo the forced, tense forms of her body. The small series seems almost a parody on pop stars from the 1970s such as Brian Ferry or David Bowie, who delighted in a sort of androgynous confusion in their acts. There is something in this combination of seductive muscularity and unmistakable phallic symbolism that also makes one think of some contemporary computer manipulations. A contributing factor is the extremely stylized pose, which explicitly plays with the codes of sexual roles. Here that results in an image of an androgynous woman; in many other Polaroids from the years 1970-75, Ulay displays an obsessive search for his own identity, often with sexual overtones. Generally this involved explicitly feminine representations and behaviours. Sometimes this led to self-portraits as a hermaphrodite, sometimes to exceptionally erotic travesty scenes, or again to painfully realistic transformations carried out on his own body, but it can also take the form of almost romantic scenes with wedding dresses. As was the case for so many artists of his generation, in that period - the beginning of the 1970s - for Ulay his own body was both the starting point and, at the same time, the means of expression, and because of its immediacy, photography was logically his medium. Photography was not so much image or form, but as direct a report of a process as it was possible to obtain.

This consciously shocking flirtation with feminine roles and attributes preceded the performances that he realized with Marina Abramovic between 1976 and 1988. The polarities which he had explored in himself were now investigated in real time and with a partner. Their subjects increasingly went beyond narcissistic, identity-related concerns, to concentrate on polarities such as culture and nature, body and spirit, quiescence and energy, art and life and individuality and universality.

Ulay made many of the Polaroid series in cooperation with the German artist Jürgen Klauke. Both were fascinated by the work of the French artist Pierre Molinier, in whose staged and assembled self-images from the 1960s and '70s the masculine and feminine were always present simultaneously. But where Molinier's photography arose from a passionate desire to merge with the feminine, the work of both Ulay and Klauke was much more provocative because they wished to make social codes and roles visible. In this sense too Ulay's Polaroids are clearly situated in their times, the first half of the 1970s, as a male pendant to the work of, for instance, Katharina Sieverding or Ulrike Rosenbach, against the background of second wave feminism.

Now, about twenty-five years later, we experience Ulay's photographs as much less shocking than we once did. What does remain is the power of the experiment, a quality which also defines Ulay's work from the past decade. An important reason for the presentation of this relatively unknown work is the remarkable ambiguity and unflagging topicality of a number of the images. Perhaps such an assessment is rooted in the present ubiquity of photography which shamelessly appeals to the voyeuristic gaze and at the same time is a fascinating mixture of investigation, eroticism and ego-document. Of course, the artistic foundations now are radically different. Ulay and his generation were often originally active in the visual arts, and employed photography principally strictly as an instrument. Present-day photographers who mix documentary and fashion photography, portrait photography, computer manipulations and staged work with one another are working expressly within photography itself. Thus it was that photographer Martine Stig a couple of years back began to work out of curiosity about the formal and substantive qualities of the snapshot. The snapshot traditionally stood for the ineptitude of the family photographer, but also, in recent days more than ever before, for immediacy and authenticity, qualities which are valued highly by many young, contemporary artists. Since photographers like Nan Goldin and Wolfgang Tillmans have committed the most intimate details of their immediate environment, friends and life (not excluding sexual affairs) to the museum public in a loose, snapshot-like style, what was previously thought of as the non-professional photograph has appreciated in significance. If nothing else, the fact that both Goldin and Tillmans have clear connections with the world of fashion can be seen as evidence of this. Goldin's frank, intimate "diary" influenced fashion photography, which was subsequently where Tillmans got his start. For both, the boundaries between genres are hardly of any relevance.

In her work, Martine Stig seems to be both attracted by the aura of authenticity, and critical with regard to the voyeuristic temptation of this photography. Her analysis of the "rules" of the snapshot led to a series of images of friends, staged so as to possess many of the properties of the classic snapshot, such as messy composition and awkward cropping by the frame. But what is most striking about them is that, undoubtedly in part because of our being accustomed to "documentary" fashion photographs, her images evoke inescapable associations with styling, and the extreme crops themselves alone seem inevitably to refer to film images. Yet there remains a certain degree of perplexity on the part of the viewer, and sympathy with the experiment, just as in her series of likewise staged, typical "photographic moments" in the life of a girl growing up.

Perhaps it is this ever more sharply developed feeling for the specific language of various photographic genres that set Martine Stig on the track of her most recent project: images of young men and women soon after sexual intercourse. What she wanted was to find a photographic equivalent of an expression, a look usually not witnessed by a third party, and yet which had to be - or could be - recognizable. It is hardly possible to be more voyeuristic, but what is ultimately at issue is the question of whether a photograph can record such a moment in an unambiguous manner. The answer, of course, is no, but that in no way detracts from the quality of Martine Stig's photographs. They are convincing simply as images of couples who are undeniably on intimate terms with each other and radiate a touching vulnerability - although that latter is partly a consequence of youth and of faces clearly somewhat dazzled by the light.

Martine Stig opted for an extremely reserved staging and - except for the portrait of herself and her friend - she is herself absent from the moment of the thoroughly prepared shot. In order for a photograph to achieve as direct a meaning as she had in mind, other details would have been necessary. Now, hair styles, t-shirts, frontality, colour and size give these images a contemporary character, but photography is too thoroughly image to be able to get across a clear-cut message by means other than through the story that details - and captions - tell.