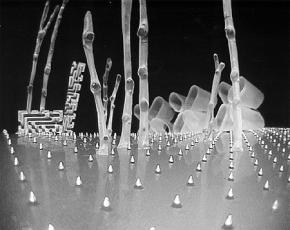 
Don’t be ashamed to cry:

When an artist builds a backlog of video works that tell stories, it might occur to the observer that their art is only a handshake and a large cheque away from Hollywood. Mostly the question never arises because artists who make video customarily build into the fabric of their work a marked hostility to everything that makes Hollywood successful. Somewhere along the line, video art set its stall against mainstream movie making as a deliberate and systematic resistance to big business, culture-by-numbers, celebrity and the commodity form; nowadays, however, the innovations of video art are adopted as much for their cultural pedigree as their subversive promise. Saskia Olde Wolbers is a video artist who takes none of the dysfunctional devices of video art for granted. She doesn’t use every trick at her disposal to undermine the stories she tells. Her artworks are therefore a rare hybrid: narrative video that is as intelligent as it is engaging.

Olde Wolbers gathers stories from newspapers, TV documentaries, dinner party conversation and heresay to tell the stories of unhinged individuals who go too far. They are people who live for their dreams, and they live them out no matter how preposterous those dreams might be. In Octet, a young woman tells the story of how she inhaled a potent dose of fertilizer before having sex with her randy husband. She becomes pregnant with eight and is so engrossed with the idea of publicly commemorating the event - in the form of a float in the village procession - that she forgets to consider the advice given to her to abort some of them for the sake of the others. Cosmos is just as dysfunctional, just as sad. A Russian wannabe bride signs up with a dating agency in the hope of marrying a rich American and is set up with a gallerist. Fearing his rejection at discovering that she knows nothing about art, she claims to be an artist and plans to win him over by creating an artwork in the hotel where they plan to meet for the first time. She makes the preparations for a giant soap suds sculpture in the hotel bathtub. Unfortunately, she miscalculates and the overflowing soap bubbles floods the entire hotel and turns the underground carpark into a deadly forest of icicles. Perhaps instead of wooing him, the gallerist will be killed by her botched artwork.

Narrative cinema in the mainstream drives its stories with action and dialogue (when, that is, it doesn’t excuse the lack of narrative with special effects and Action with a capital ‘A’); Olde Wolbers dispenses with action and dialogue, preferring the more suggestive combination of unpopulated mise en scene and off- camera narration. Old style documentary, and particularly the natural history genre, would be the conventional televisual format closest to the effect, but Olde Wolbers has no investment in the authority that they perpetuate. Narration is never, for her, the disinterested voice of truth but always the subjective and self- opaque report of baroque autobiographical events. In this respect, Olde Wolbers’ videos enjoy a kinship with the Nouvelle Vague of Jean Luc Godard and Chris Marker. It is with the interrogation of narration, and the relationship between image and voice generally, that Godard’s work got its first taste of what came to be known as ‘counter-cinema’. And Marker’s La Jettee redefined cinematic narrative by restricting itself to the interplay of voiceover and visual sequence. Film theorists regard these techniques as among the principle innovations in the subversion of narrative but in the context of the gallery, they give narrative a surprising shot in the arm. Despite the overlaps, then, Olde Wolbers’ videos have little in common with the cultural strategies of ‘counter-cinema’; they do not play down cinematic narrative for the lofty effects of intellectual critique but import the seductive appeal of narrative into the haughty chambers of elevated culture.

Individually, videos such as Octet and Cosmos are charming tales. These quirky stories make friends so easily that they might appear comfortable, like Matisse’s idea of the bourgeois art lover resting in an armchair. Historically, though, Olde Wolbers’ work occupies the critically uneasy - and vital - space between the high ideals of modernist autonomy and the populist sentiments of postmodernist pleasures. For a time, during the heyday of the postmodernist challenge to modernist forms of attention, it looked like narrative was going to be welcomed as a newly legitimate tool of a new art. In fact, cultural theory made a fad of redescribing all manner of things as narratives, from nations to subjectivities. Then, in the blink of an eye, and possibly as a result of the free use of the concept, narrative was out of intellectual favour and looked on with suspicion. With hindsight, we might add that postmodernists stretched the concept of narrative to such an extent that what it championed was not narrative at all. Narrative, rather, was as culturally denigrated in postmodernism as it had been at the birth of modernism itself. Greenberg toughened autonomous art’s hostility to what he called the ‘literary’ but the dye had been cast by Clive Bell in the last decade of the nineteenth-century. Narrative is always false in art, Bell argued, because it prompts vicarious experience instead of the immediate emotional experience of ‘significant form’. It is only after narrative and its representational cousins have been discredited that Bell asserts: “to appreciate a work of art we need bring with us nothing from life, no knowledge of its ideas and affairs, no familiarity with its emotions”.

Ad Reinhardt restated Bell’s point much fiercer: ‘art is art and everything else is everything else’. It follows that narrative, in this modernist tradition, was part of ‘everything else’ not ‘art’. Worse still, narrative facilitates traffic between art and everything else. For modernists, then, narrative was more than a blunder; it was a threat. In other words, narrative art was a contradiction in terms. Inevitably, however, what appears as a contradiction in terms for one cultural paradigm will be useful for a culture that emerges out of a critique of that paradigm, so narrative’s ability to violate the modernist divide between art and life has become a valuable resource in contemporary art’s defiance of it. If narrative is a threat to modern art’s autonomy and an insult to modernist sensibility, then it is an ally of the resistance to cultural division. Still, sensibilities are not so easily transformed, and narrative is still largely frowned upon in art today. Sneering at narrative is no longer the exclusive privilege of modernists. Postmodernists committed to the project of dismantling cultural division remain somehow unable to encounter a narrative without feeling that something is wrong. Perhaps it is time to say that narrative is a test of your critical commitments, instead of assuming that critical thinking is always in a better position to put narrative on trial?

The case for narrative in art can be made intellectually, but it is easier to make when you encounter the works of Olde Wolbers. They are beautiful stories told with a love of those who live awkward lives. While listening to the strange and plaintive tales of individual calamity we see images of places that exist somewhere between reality and fantasy. It is where they belong. Olde Wolbers builds meticulous models that act as her shooting stage - only, she shoots the stage set without action, so that it is both the home of her unfortunate characters and a character itself - and as the set develops the characters and their baroque tragedies develops with it. If the voiceover did not recount the heart-rending tale of love and dignity lost, the landscape would convince us that misery hides just beneath their show of strength and pride. Large sections of mainstream cinema abandoned moralistic notions of the hero a long time ago, but its big budgets have tended to guarantee that the anti-heroes, eccentrics and losers in the movies have to be spectacularised or glamourised. Olde Wolbers, on the other hand, is as tender with her idiosyncratic characters as a gardener is with a rare flower. Maybe this is why one of her most tragic characters is a farmer.

In Day-Glo a Spanish farmer tells his real estate agent about how he converted a bankrupt greenhouse in the Australian Outback into a virtual reality theme park. It is a success story of following the money and making it. Or, rather, it would be if the VR contraption had not, somehow, taken his wife from him. She is lost form him for good now. The fact that he’s telling a real estate agent, someone for whom the stories that inhabit properties are erased in the act of purchase (a sequence of endings and beginnings with no lived middle), only adds to the farmer’s miserable desertion. As does the nature of her disappearance: she fell in love with a VR simulation of the farmer as a young man. You might wonder how long his estranged wife can abide this eternal youth but the farmer knows he will never see her grow old. She has entered the 21st Century version of the Underworld. In Olde Wolbers’ new work, the deserted Outback is replaced by a similarly cut off landscape of watery isolation. Underwater scenes frame the story of a man who protests against the world’s largest dam and its effect on local communities by kidnapping a female TV presenter who ultimately has his child. It is the child’s story and the watery images are both the proof of its dad’s concern and a prenatal experience of its mum’s womb. It sounds like the child is putting on a brave face because the events are elaborately tragic but the child is looking for heroes. Mainstream cinema would cast beautiful celebrities in the roles that the child wants its parents to play and the movie would be full of close-ups of their heroic, happy, handsome faces. We never see the narrators’ faces in Olde Wolbers’ works and we don't want to because we care too much about their inner lives.