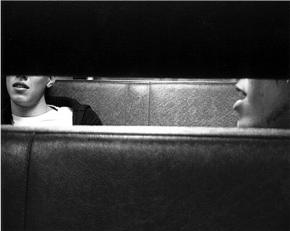 'Talkshow' is the title of the first solo exhibition by Julika Rudelius's (Cologne, 1968). In her photographic and video work Rudelius investigates human behaviour and group dynamics - the codes and characteristics through which people define themselves as groups. The exhibition concentrates on Rudelius's video work and will contain three brand-new videos and one video from 2000. All these pieces show people talking about themselves and their relations to others. The videos are based on situations that Rudelius has observed in reality and then reconstructed for the work. In this way she produces stinging insights into social codes and role models. Because of the realistic, documentary-style Rudelius employs - from (street) interview to candid camera - the viewer is carried along quite naturally by her narratives. However, after a while something begins to niggle and the viewer begins to feel the uncomfortable sensation that something is not quite right in the 'real-life stories' that are being told with such conviction. The video Interview 01 (2001) records a conversation between four people. At first it appears to concern a group of friends. Their conversation revolves around the history of their friendship - how they met, how they feel about the relations between them and how they experience each other's behaviour. But gradually the tone of the conversation changes. What at first appeared to be a somewhat nostalgic look back over long-term intimacy degenerates into unmistakable aggression, criticism and suspicion of others. We are left with the realization that we have been manipulated by ...well, by what exactly? Our own gullibility, the suggestiveness of the medium, the codes of spontaneous, personal conversation?

- You have to distinguish between women. Some women are only good for fucking....No, admit it, it’s true! Some women...like, Balder and I met this girl yesterday....no, the day before yesterday, at the gym.

- Such a sweet girl.

- No, but look, women like that: I’ll fuck you tonight but tomorrow I won’t know you anymore.

- That’s the difference, some sluts:

- You chat them up and fuck them the same night.

- Yeah, but you can spot that, which ones are like that.

- …This cliché thing you’re go on about…it’s difficult isn’t it. I mean, we all want to imagine that we have some profound statement to make about our lives or our hopes – but most of the time it’s all already been said.

- Yeah, I guess. Or maybe it’s just that some people don’t have anything original to offer anyway.

- You can’t say that, it’s so patronising! Jesus, what makes you so special?

- I’ve been trying to work that out but it’s not easy. Of course, I don’t think anything makes me special at all but I think I’d be a bit sharper than these guys.

You got to remember that when you’re in this kind of situation with the TV cameras on the simplest thing is to fall back on clichés – just because you know people will understand. It’s why politicians or sports stars never actually say anything meaningful. Television is just such a sucker for the blindingly obvious.

- The medium is the message, maybe.

- You see, there you go, resorting to your own pat phrases!

- OK, you win there, but it’s much more than that. For someone watching these films, or even watching reality TV, you are never totally convinced that people are not acting. And of course they are, because they are aware, maybe only at an almost subliminal level, of the camera. And so, as actors, their opinions would not be their own anyway, but put into their mouths by some Svengali playwright. It’s this uncertainty, this closing of the gap between factual and fictional that is where it gets much more interesting. Especially because I’m guessing that this kind of image is the closest we can get to ‘everday life’ now - a restaging of events as close as possible to what we imagine to be the genuine experience.

- Look, what I’m saying is that we’d all resort to these easy expressions because we want to be normal and not stand out. We want everyday life to still exist, so we act it out to make it real. In some ways maybe these people are being far more honest than you or they could ever believe.

- But this is just so ’normal’ it’s almost frightening. Like they are just spouting what they’ve heard somewhere else.

- And we’re not? Maybe, kids and people in their mid-twenties just always act out their opinions in order to work out what they feel about them. They use their friends as a kind of audience to find out how their opinions go down in public. But you should listen to him here.

M - So where is you’re girlfriend, tonight?

- Well that’s another story. We’re having a bit of a fight at the moment actually, so I came here to prove myself to her. She thinks - I just heard this tonight - she thinks I’m a bit boring. So yeah....I’m just trying to prove myself.

M - And did you dress up especially for tonight?

M - So you’re having a fight with your girlfriend?

- It’s all so superficial here, I really don’t like it at all.

(boy to the left)

- just look behind you!

M - Did you hear that? He finds it superficial here.

(girl to the left)

M - But you find it superficial.

- Yeah but, all these people in here.....they’ll all be dancing.

- Yeah but it’s so superficial here, what does that mean, get over it?

- The fact that you’re in the queue already says enough.

- Lots of people find it superficial here, but they’re still queuing up.

- Yeah but that’s also so ridiculous.

(boy to the left)

- I came here because my girlfriend thinks I don’t have enough friends.

- He is pathetic, just like the girls say, but isn’t he acting, would anyone really do that on TV?

Oh, come on, of course he would, that’s how it works. Look, Today Big Brother is a classic format right, but it wouldn’t have happened 10 or maybe just five years ago. Then the network controllers would have probably said: ‘this is just everyday life, there’s nothing remarkable about it. It will totally bore the viewers and they’ll switch off.’ And maybe they were right then. We seem to have stepped over a threshold where the everyday as a mundane backdrop to our existence has actually been eradicated. Now we have to remember or recapture it to make it real. If you think about this talk we’re having, I can’t help imagining that it will be quoted sometime or recorded or filmed. And if it isn’t, then to all intents and purposes it didn’t exist – or at least its significance is less than if it hadn’t ever happened.

- What about the boys on the train yesterday, then?

- The boys just like those ones in the video.

- Oh, yeah exactly, that’s what those boys were doing, no?

- Hmmm, maybe. It does feel like they’re playing the kind of role they think they should be. But where do they get those attitudes to women? That’s what’s worrying. Why do they think this is the way they should behave in the first place? It has to be explained by more that just nostalgia for the everyday or whatever. Maybe, if they were drunk I could understand it better, but the whole thing is so daytime public.

- Yeah. I’ll seize the day and go with the flow. I’d had some drinks, so had she and she told me how she felt about you, which wasn’t so much anymore.

- Did you fuck her too? Is that what you’re telling me?

- I think it’s all done for someone else’s benefit. That’s they point, we all subject to someone else’s gaze so we so we just behave like it’s always there. They knew someone was watching and hammed it all up. But just the same, the way they did it was pretty sad – having to prove themselves like that.

- I guess…when you think about it, it says a lot about men. I read somewhere that the male gender might evolve out of the human genome in 1000 years. All their reasons to exist are disappearing, from reproduction to aggression to single point concentration. It’s going to be a multi-tasking, socially negotiable millennium and men just aren’t up to it.

- Didn’t you say those kind of things when you were that age?

- I bet! Your just ashamed of your childhood…but look this stuff here gives you permission to own up to your politically incorrect past.

- Does it really? There’s something else here. Everyone seems quite distanced from each other, like the friendships are not genuine. I think I know they’re acting but I can’t quite believe it. There’s this undercurrent of alienation that is just too perfect not to be real. Everyone always makes these tragic little comments about each other. I’m not sure whether that’s giving us permission or just the uncomfortable feeling of recognition.

- And how is your relationship with Maureen?

- Well, good, we’re friends, we’re all friends though we suddenly went on vacation alone last time, because you couldn’t come.

- Next time you really have to come with us!

- It’s funny now isn’t is, but the one that I find most tragic, the most despairing is the single one with the girl.

- Oh, come on that’s your gender talking. She’s fine, or they are, I can’t quite work it out. She’ll grow up and have a beautiful family and live happily ever after.

- That whole video is about as sad as a fucking fairy story.

- But yeah, now that I’ve been with him for 6 1/2 years - and of course, I’ve gotten older and I’ve learnt more - I notice that my thoughts and my communication skills are more developed than his now, which is a shame.

I always try to let him talk more about himself and his feelings.

You have to be patient with these things. Rome wasn’t built in a day either. That comes in time, just like common sense.

- Why? Can’t you let people have their happy fantasies? It’s what sustains us all, some hope of the future and our life to come.

- Because that’s exactly what is not going on. Listen to it. Can’t you hear the huge gap between hope and experience here. It’s like she’s been brainwashed to believe in something that is patently not true. That’s the gap again, like in the other videos here, between fiction and fact, though this time it seems much harder to bear. Fact is better than fiction for the men but for the women it’s the reverse….Jesus, I’m depressed now.

- Happy family. A house with a garden and a pet, that’s what I imagine when I think about the future. I have the house already, even if it’s not that big.

By family pet, I don’t mean our cat but a little baby. And then we’d have to move.

And a bigger house would certainly have a garden and that’s were the garden comes into the picture.

In a way a really average family. Nothing too spectacular. And not what I once, or at times, expected, but it’s something I know I’m going to long for and marriage is certainly part of it.

I do love children, but then I have to be married first. And call it old-fashioned, call it strange,

but just for one day in my life I want to feel like a princess.

Yeah, I know you’d spend a huge 25000 guilders, but it’s worth it. Just to let everybody see that you’re marrying the man of your dreams.