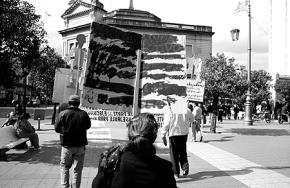 One day the term 'white cube' entered art parlance. It is the name for an almost archetypical space specifically intended for the exhibition of art, designed to be (prominently) self-effacing and to place its contents on a pedestal. The floor is preferably grey, the walls white -naturally-and architectural features eliminated as far as possible. It is a space that aestheticizes everything it contains, that prefers to see the back of its public, or better, to reveal its quality only to a single, select individual: an invitation to contemplation -undisturbed, quiet, concentration. It has house rules (silence, circumspection, reverence), even subjecting its visitors to behavioural codes (hands behind the back, or one hand under the chin and the other supporting the elbow, contrapposto). Although physical character of the exhibition space at Bureau Amsterdam is hardly an exemplary white cube, it still adeptly evinces the same modes of behaviour in its visitors. 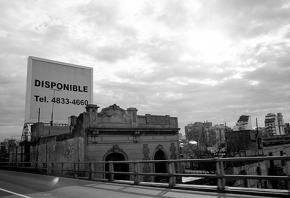 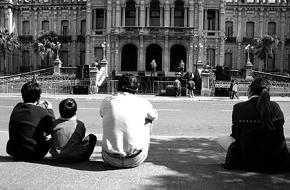 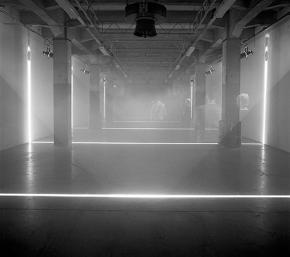 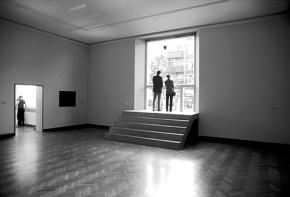 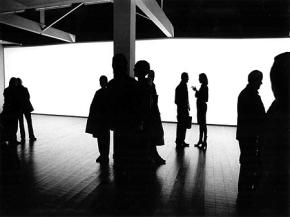 Germaine Kruip's 'Rehearsal' leaves the space at Bureau Amsterdam apparently untouched. The space is as good as empty, apart from the back wall, which has been transformed into a light box, and a black carpet covering the floor in the front space which absorbs the sounds of footsteps. In this space fellow visitors become silhouettes against the bright light, newcomers are lit more brightly than they ever have been as they look back towards the entrance. So (here it comes), 'Where's the art?'

To contrast this with another space, a public space, somewhere else: Tucuman, Argentina. Since the fall of the dictatorial regime, but especially since the recent economic collapse, day-to-day life in Argentina has been turned inside out; out into the public domain. Political history and the economic status quo are today visible in the street. In a country marked by the repetition of disappearance, everything that might point to a functioning society now literally stands, lies or sits in the street: instead of advertising their clients, empty hoardings advertise their own space, the local cinema has closed and been taken over by a commercial religious group. Residents of Tucuman take to the public space of the streets, expressing their disaffection with their presence, as if the individual being were the last existing means of expression.

It is here in this space that Kruip realized the work 'Point of View', having done it before in Amsterdam and Stockholm. The piece comprises little more than a temporary scene in which actors, with the art audienceís knowledge, merge into the street. Because the viewers do not immediately know who are the actors faultlessly performing their role of accidental participants in public space, and who are the true accidental participants in that space, a situation arises which exacts from them a heightened power of observation. In the experience of concentrated observation and visual alertness that the work activates in its public - in the first instance a public of initiates, but secondly of non-initiates - lies the basis for a new image of the street.

The Tucuman piece was interpreted by many as political. Is it possible that a work in which the space of Bureau Amsterdam is turned into an almost literal duplication of its physical appearance could be by the same artist? And how should we then understand the exhibition 'Rehearsal'?

Take the one space as a repetition of the other. Germaine Kruip does not make tangible work, objects that can be placed or hung. A more apt description would be stages or platforms, or - with a premeditated reference to that obscure, but charismatic avant-garde movement of the 1950s and -60s - situations, which place her public within a constellation, that confronts it with the way it observes and interprets.

Signification is generated via an external referent. Situations and images are recognized and understood in terms of a previously formed frame of reference, on the basis of which meaning is rendered. Sometimes the emphasis is on a set of personal references, sometimes the framework is more inflected by shared references. Images from the collective memory, social codes, but also individual associations ('the colour of the dress your mother wore that day when...') determine our understanding of what is observed. As an almost illusive, fluctuating body of references, the framework determines what we see.

These are the mechanisms Kruip employs in her work. The way we read one thing repeats what we have read before, but it also colours what we shall read. By, as it were, placing a magnifying glass over that to which she directs her audience, she simultaneously questions any obvious interpretation.

The rehearsal, as a universal reference bearing within it the dual meaning of both 'just before' and 'just after', refers to another, intangible region that is framed by it: the entre-deux. Literally being 'between two', the entre-deux is that which cannot be unequivocally defined, because it is determined by what preceded it and what shall succeed it. The figurative and literal spatial rehearsal - which in the work Rehearsal is brought into a relation with the white cube, the space which is designed to refer to everything it contains - knocks every automatic interpretation of the work in the space out of kilter. The search is for the entre-deux.

The Actor (The Audience)

Take the one space as a reflection of the other. In the monumental space of the Bagagehal in Loods 6, Amsterdam, Kruip based her light installation 'Light Screens' (2001) on the existing architectural framework, translating the core principles of cinematography into those of three dimensionality. Analogous to the effect of a sequence of frames per second which is perceived by the human eye as a moving image, twelve screens of light were installed along the entire length of the hall which measured almost one hundred meters. Following a computer-driven lighting scheme -able to achieve such high speeds that the twelve could be successively illuminated in a single second- the screens of light optically divided the hall into constantly changing segments. Fellow visitors were briefly blinded and others illuminated for a split second the moment they were caught by a light screen.

It is the basis of every discourse: translation. In fact translation comes down to paring and recontextualizing information. Stripping something of all extraneous, time, form or environmental factors in order to reposition it in another, current context. For 'Light Screens' Kruip used this way of working to translate the medium of film into the temporal-spatial conditions of an exhibition. The space in which the exhibition is situated thus becomes a fictional, filmic space which almost transforms the audience into actors.

Take 'actor' to mean player in the usual sense of the word, but also in its original meaning as 'one who acts'. In an oscillation between the poles of subject and object, viewer and viewed, the actor is the one who defines the audience, who is defined by the audience and who, through the application of the mechanism of signification, simultaneously plots and defines the narrative. An appeal to act.

Take one space as an antithesis of the other. Applying craquelure to the external appearance of one space creates room for the other space to emerge. For the work '2 Seconds' (2000), in one of the galleries in the Stedelijk Museum, Kruip built a monumental staircase in front of a floor-to-ceiling window overlooking Van Baerlestraat. When not in use and therefore resting in its non-functional state, the staircase merged with the surroundings of the museum gallery, becoming an aesthetic object. But the moment a visitor stepped onto it, it manifested itself as a stage. A parabolic loudspeaker near the window transported the sounds of the street outside into the gallery. Not synchronously, but with a delay of two seconds, through which the image and sound of the outside world became detached from each other. Not only did the stage provide a view from inside to outside; passers-by in the street were also able view the museum visitors as they stood like art works on display in front of the window.

Perhaps it is possible to draw a line from the history of performance, as a form of expression in art, to Kruip’s work. If performance was originally intended as something to be observed - almost like an object on a wall or plinth - with the aim of making its audience conscious of its own presence - perhaps making it feel extremely uncomfortable - then Kruip’s work for Bureau Amsterdam could formally be described as a performance in which the audience is simultaneously performer and performance, within the framework of the surroundings in which it finds itself. The audience only becomes aware of this because it is presented with it in an enlarged state.

To come back to the questions raised earlier:

Where is the art here?

How should Rehearsal be understood?

REHEARSAL - BLURRING THE SHOW INTO THE PUBLIC

One day the term ‘white cube’ entered art parlance. It is the name for an almost archetypical space specifically intended for the exhibition of art, designed to be (prominently) self-effacing and to place its contents on a pedestal.....